Many people may not realize that Laughing Squid was originally started as a documentary film company. In 1995, the same year I founded the company, we completed production of our first documentary, Alonso G. Smith, A Half Century of Social Surrealism about the amazing San Francisco Bay Area surrealist painter Alonso G. Smith. We had a big debut screening at Delancy Street Theater in San Francisco on March 9, 1996 with both Alonso and his wife Sidell in attendance. It was just 3 months before he passed away at age 78 on July 12, 1996, followed by Sidell in 1998.

I produced, directed and edited the film, working in collaboration with my friends Christopher Nissley and Eric Stachowski. We started out shooting in 16mm film, finishing on HI-8 video and I edited it on Media 100. 16 years later, my first is finally making its online debut.

Produced during Alonso Smith’s final years, this half-hour documentary explores the life and work of one of America’s most fascinating surrealist painters whose legacy is an amazing body of work that stands as a visual document of the last half of the 20th Century.

Here is the documentary’s screening and broadcast history, which includes a January 20, 1997 airing on the PBS station KTEH in San Jose. I would like to give a big thanks to Alonso, his wife Sidell, and all the amazing people who helped make this film a reality. For more on Alonso’s wonderful artwork, check out his online gallery of paintings. 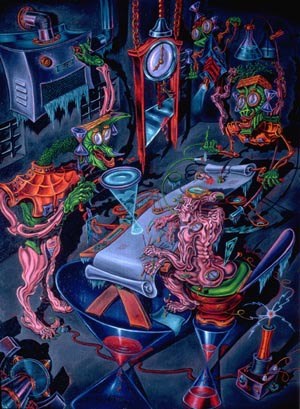 Now for a little background on how we discovered Alonso and his work. Around 1993 my old high school friend David Klass (we moved out to San Francisco together and were roommates), came home one day and told me about this amazing painting he had seen at a psychedelic art show at ArtRock Gallery in San Francisco. The show featured a variety of psychedelic artists like Alex Grey, but this one was different. I went to see it in person. It was a painting called “Psychiatric Maelstrom” by Alonso G. Smith, of whom neither of us had ever heard before. What amazed both us is that he painted it in 1949! We considered ourselves pretty knowledgable about surrealist art, so we surprised that we were not familiar with him. We noticed that his work was similar to paintings by Robert Williams, but from several decades earlier.

Since this was 1993 and the web was in its infancy, an online search was not an option, so we went to the San Francisco Public Library to see if we could find out more about this mysterious painter. We found a few somewhat recent articles and noticed that they were all by Bay Area publications. Could Alonso be a local artist? Is he still alive? How amazing would that be?

On a whim, we called information and to our surprise, we found an Alonso Smith living in San Mateo. So, of course, we tried calling the number and a woman answered. We asked if she had any information on the surrealist painter Alonso Smith. She said, “Sure, he’s my husband, let me hand the phone over to him”. And just like that, we were on the phone with Alonso, a 76 year-old surrealist who has been painting since the 1940s, asking him about his amazing art. One of our first questions was to ask if could we see more of his art. He told us that most of the paintings were in his home (as you’ll see in the film) and if we would like to we could come down and see it in person. That blew us away. Of course, we immediately made plans to visit him, soon becoming good friends with both Alonso and his wife Sidell, often visiting them and going to his art openings.

At the time I had been working at the San Francisco video dub house Allied Film+Video, scheduling film-to-tape transfers on a Telecine and had been looking for a subject for my first film and this was a perfect fit. After two years of production and editing, we finished the documentary in November 1995 and I set up Laughing Squid as a documentary production company to produce and distributed the film. Not long after our tentacles extended into the online world, but it all began with this artist and the documentary film I made about him.