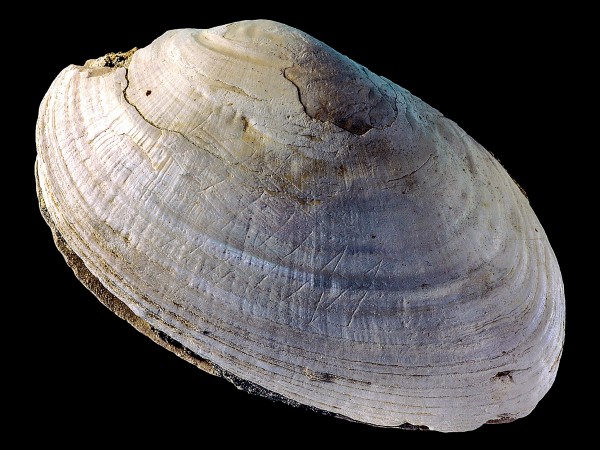 In the 1890s, Dutch paleoanthropologist and geologist Eugène Dubois collected fossils in Trinil, Indonesia. Among his findings were fossilized shells and bones of Homo erectus. His collection sat in a Dutch museum (now the Naturalis Biodiversity Center) for over a century until a collaboration between archaeologist Dr. José Joordens and bioanthropologist Dr. Stephen Munro found a geometric etching on one of the shells.

The zigzag shape of the etching indicates that the “artist” gave purposeful, careful attention to the abstract pattern. Neuroscientist David Edelman spoke with New Scientist and said, “Whether the zigzag pattern had a specific meaning or was merely a sort of doodle seems irrelevant. Regardless of intent, the very process of rendering a geometric form would seem to indicate the workings of a mind no longer tethered solely to the here and now, but capable of a uniquely abstract form of conscious ‘wandering’.”

Dating of the sediment in the cracks of the fossils showed that the shell had been buried 430,000 and 540,000 years ago, long before modern humans evolved, making this etching the oldest currently known example of art. Scientists determined the etching was most likely made with a shark tooth but that the purpose of the etching is unknown. Joordens said, “We cannot look into the mind of the person who made it. But we can speculate. One thing the marks suggest is that half a million years ago, these distant ancestors already had some sense of aesthetics.”

Although it is at present not possible to assess the function or meaning of the engraved shell, this discovery suggests that engraving abstract patterns was in the realm of Asian Homo erectus cognition and neuromotor control.

More information can be found in the journal Nature.