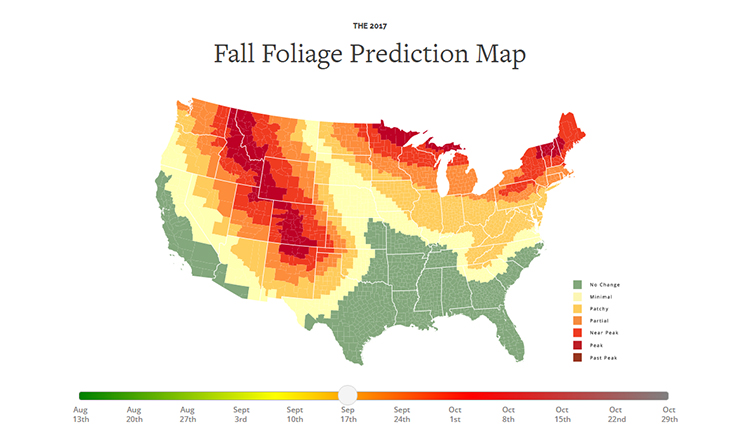 SmokyMountains.com has released their interactive map for 2017 that helps predict the best time for seeing the beautiful fall foliage colors throughout the United States. It allows users to change the details of the map by week, via a slider at the bottom, to see when the foliage in their area is expected to change.

The Science Of It All:

It all starts with photosynthesis. Leaves typically produce their vivid hues of green from spring through summer into early fall through the constant creation of Chlorophyll. As we all learned in 5th grade science, Chlorophyll is the key component in a plants ability to turn sunlight into glucose, which in turn feeds the trees. Many millions of these Chlorophyll cells saturate the leaves, ultimately making them appear green to the eye.

Chlorophyll is not the only player in the fall leaf color game. Present in other leaves and trees are the compounds known as Carotenoids and Anthocyanins. As the Fall days begin to get shorter and shorter, the production of Chlorophyll slows to a hault, eventually giving way to the ‘true’ color of the leaf. (read more)