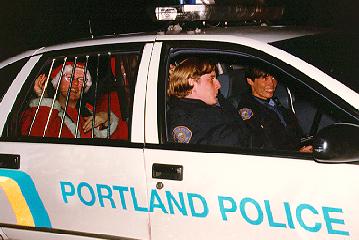 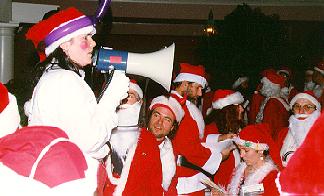 Here’s a great write-up on the event from mikl-em:

It was the Cacophonist of times, the first Santa Rampage planned for outside the City by the Bay. And vision of riots danced in The Man’s heads. Cuz Saint Nicholaus x 10 x 10 x 2 soon would be there.

Yup, 200 Santas invaded Portland (some were indigineous, actually) 10 years ago. And a bunch of this city’s usual suspects were of course leading the charge. The list reads like a Ho’s Ho of SF Cacophony. Melmouth, Geekboy, Cortez, Holmes, Burke, John, and of course that damn Beale guy. With his video camera!

It was before my time. Just before my time. I was here but I hadn’t quite drunk the water yet. :) I went the next year to LA. You can see a very quick cameo of Danielle, early on–she didn’t go to Portland though, it’s in pre-launch festivities.

I believe that this video, assembled by Scott Beale, Stu Mangrum, and Scott’s voiceover guy friend, is the best encapsulation of the mysterious, beautiful, intoxicating and creative mischief that we breed out here in Norton’s city. Practitioners of forgotten social arts and biters of feeding hands, the post-something, semi- comatose cultural criticism of the Drunken Masters, all hail Santa(s) in Perversitus Bacchanalium Uber Alles. And shit.

Whenever friends came to visit and wanted to know what I’d been doing, I would play them this video. It was much easier to explain that way. It’s like this. Every weekend. *Sigh*.

10 years ago? No way. You’re lying. Not every weekend is like this anymore. It’s probably still going on, and I’m just not sticking my foot in it as often. But on Tuesday, we’ll get a nice fat taste of Vintage 96 Cacophony. Wear something you can get messy. Like say a holiday outfit from Oriental Trading Company (remember, one size fits none).

Also, check out the awesome photos of the 1996 Portland Santacon that Wm Leler shot that year.