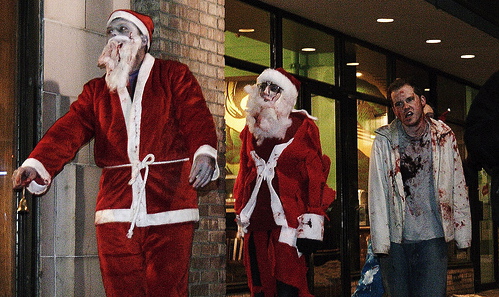 A few of the non-Zombies traveling along with us reported snippets of conversations that they’d overheard during our march. One reported on a conversation between an older husband and wife. The wife asked her husband, “Why are they doing this?” The husband responded, “It’s how they’ve chosen to express themselves, Dear”. The second report was of another couple. In that one, the man said to the woman he was with, “Don’t be scared, they’re just from Ypsi”.

UPDATE: Santarchy! has a write-up on Zombie Claus as well.