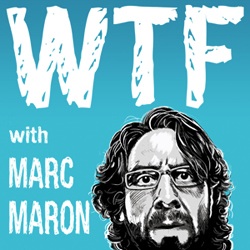 Marc Maron is a comedian who’s been doing stand-up comedy since the days of Sam Kinison, but I don’t know him from his comedy work. I know him from “WTF“, his biweekly podcast that started in September 2009. It’s a mixture of political rants, personal introspection frequently bordering on TMI therapy, meta-commentary on his attempt to find a sustainable business model in free internet podcasting, and interviews with well known headliner comedians like Ben Stiller, Patton Oswalt, Margaret Cho, or “Metalocalypse” creator Brendon Small.

It’s the interviews where Marc really shines. As a fellow performer and community member with few axes to grind his guests open up to him as a peer and talk shop in a way that’s often surprisingly personal, intimate, and honest. His insider credentials give him the ability to openly discuss sensitive issues like allegations of joke stealing with Carlos Mencia and his former openers, popularity backlash with Dane Cook, substance abuse and divorce with Robin Williams, or the inside story of the collapse of the Tonight Show with Andy Richter. Marc’s attitude toward himself might be full of indecision and self-doubt, but when he interviews very big names he walks a very fine line between asking difficult questions without being provocative or confrontational. “Not looking to indict, but looking to get some sense of truth.”

I probably wouldn’t have come across Marc’s work if it hadn’t been for his podcast, and if I had I might not have enjoyed. Marc’s comedy style is not my style, but as a podcaster he’s a neurotically likable guy doing increasingly good work that’s well worth checking out. New York locals might want to check out Comix NY, where he’ll be recording two live WTF shows on Wednesday, June 21st.