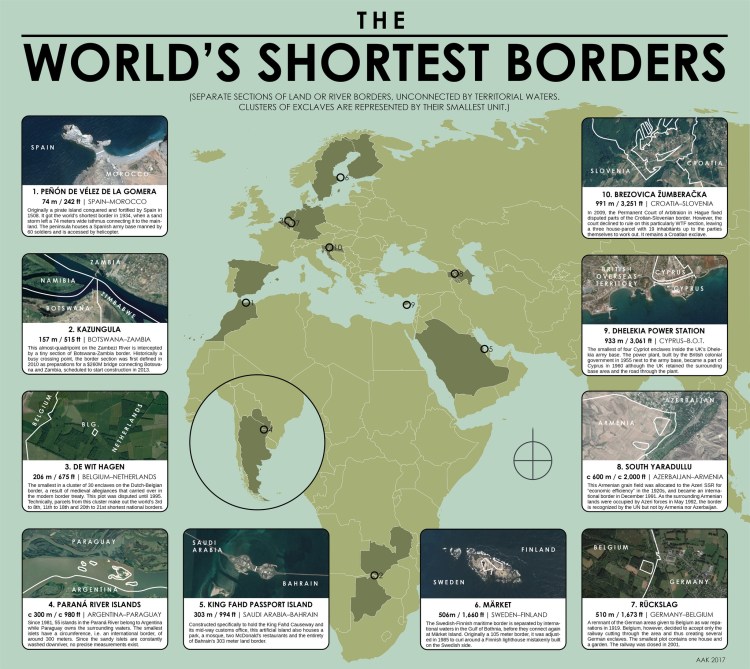 Redditor Anders Kvernberg aka PisseGuri82, a librarian at Nasjonalbiblioteket in Oslo, Norway created a fascinating map that plots ten of the shortest borders throughout the world. Amongst these borders are those between Spain and Morocco, Botswana and Zambia, Belgium and The Netherlands, Argentina and Paraguay, and Sweden and Finland, just to name a few. It is interesting to note, with the exception of Argentina and Paraguay, the majority of these borders exist in Europe, Africa and Scandinavia. When asked about the confusion of borders between Belgium and The Netherlands, Kvernberg responded in kind.

Well, Belgium and Germany also have a few of those things going on. But yes, those situations can be a real problem when coupled with a lack of political stability. There are similar border gore sections between Uzbekistan-Kyrgyzstan and Azerbaijan-Armenia. Among the problems are land mines everywhere, border guards shooting and killing each other at will (in the Uzbek Sokh enclave this is apparently a common problem) and whole communities living without utilities and access to medical help and police. That was the main reason India and Bangladesh recently cleaned up their border, conditions like these were affecting tons of people.