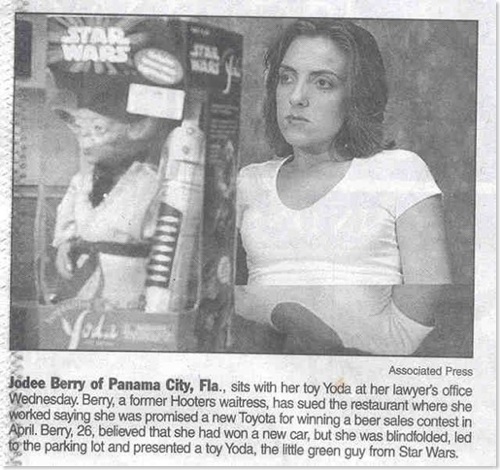 Jodee Berry, a Hooters waitress in Panama City, Florida, thought that she had won a Toyota in a beer sales contest, not a toy Yoda. She ended up suing Hooters, who settled by giving her an actual Toyota. According to the manager of the Hooters, the contest was an April Fool’s Day joke.

Jodee Berry, 27, won a beer sales contest last May at the Panama City Beach Hooters. She believed she had won a new Toyota and happily was escorted to the restaurant’s parking lot in a blindfold.

But when the blindfold was removed, she found she had won a new toy Yoda — the little green character from the Star Wars movies.