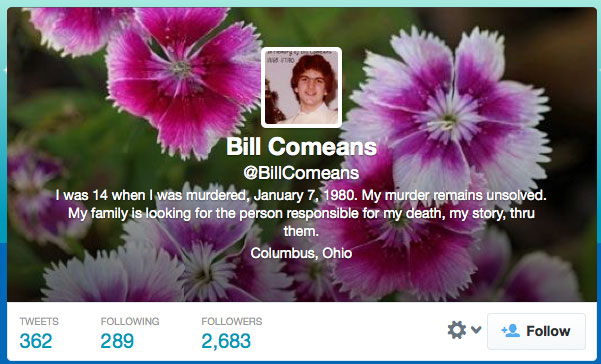 In 1980 14-year-old Bill Comeans was murdered near his home outside Columbus, Ohio—a crime that remains unsolved 34 year later. In an effort to bring attention to the case, Comeans’s little sister Kathleen recently launched a @BillComeans Twitter account and began tweeting in her brother’s voice. Her tweets include chilling messages to her brother’s killer, pleas to the public and investigators, and newspaper clippings about the case. The Daily Dot has posted a detailed write-up about the case and Kathleen’s social media campaign.

34 years ago today, I was murdered. I was 14 and had my entire life to live. My family is still looking for my killer.

This is the last picture of me and my sister together. That was a good Christmas. I loved spending time with her. pic.twitter.com/LqSO6MYtQv

My last meal was a half a bowl of ice cream. I put it in the freezer so I could go get my sis. That bowl stayed in our freezer three years.