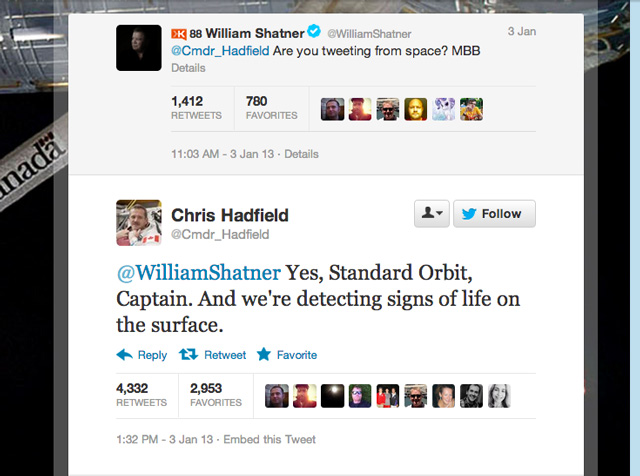 Former Star Trek starship captain William Shatner sent a tweet to Commander Chris Hadfield, a Canadian astronaut currently living in space aboard the International Space Station as Flight Engineer. About an hour and a half later, Hadfield tweeted back to Shatner. Then, George Takei posted their interaction on Facebook and also had an exchange with Hadfield on Twitter. Finally, Buzz Aldrin got in on the fun.

With @georgetakei posting about our space comms, all we need is @therealnimoy to beam in and we’d have an away team! :) facebook.com/photo.php?fbid…

.@cmdr_hadfield: I’m fine with beaming down with the away team, as long as I don’t have to wear the red shirt.

@cmdr_hadfield @williamshatner Neil & I would’ve tweeted from the moon if we could have but I would prefer to tweet from Mars. Maybe by 2040