Thanks to the Wayback Machine that is YouTube, I discovered this epic clip of pioneering female punk rocker Wendy O. Williams and her band The Plasmatics performing “Black Leather Monster” on the notoriously cheesy 80’s television show, “Solid Gold“.

Taped in 1981, the clip exquisitely encapsulates the unabashed aesthetic indulgences of its time, from tepid co-host Andy Gibb’s feathered hairdo to Wendy’s bizarre post-performance interview with Madame, the famously campy puppet voiced by ventriloquist Wayland Flowers. (That Madame would later go on to receive her own nightly sitcom – “Madam’s Place” – seems entirely unsurprising in such a context.)

This background of harmless banality only serves to make Wendy’s performance all the more striking, and her booking on the show more puzzling. 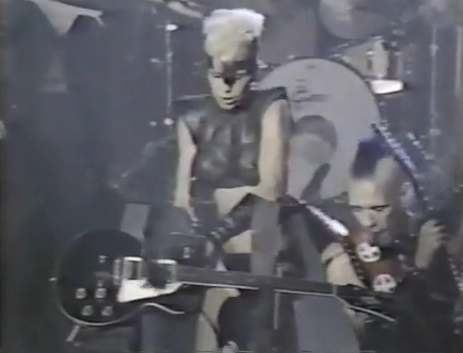 The highlight of the video is Wendy’s mid-song guitar solo, which she performs by cutting an electric guitar – still plugged in and amplified of course – in half with a chainsaw. 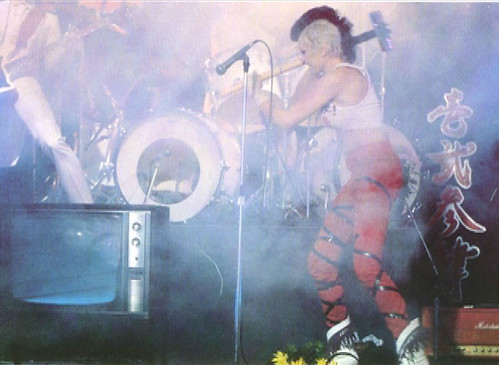 [She] frequently detonated cars live onstage which got the band banned in some cities. Their doomsday scenario message coupled with their onstage antics often scared promoters into cancelling gigs, yet the band performed relentlessly. Although Wendy was victim to arrests, police brutality and sexual harrasment she continued to spread her philosophy and blow things up.

Wendy O. Williams was a punk rock superhero with amazing personal style and a rock-solid, healthy body. She sang with a powerful, gutteral snarl, often had gravity defying hair and never missed a gig unless she was incarcerated. She usually performed in some stage of undress but was always in control of her own sexuality. Wendy was a true feminist: neither a “female rock artist” nor a butch girl but Wendy O. Williams- undefinable and unique.

Oh yeah, and that thing with the black electrical tape over the nipples? Wendy did it first. 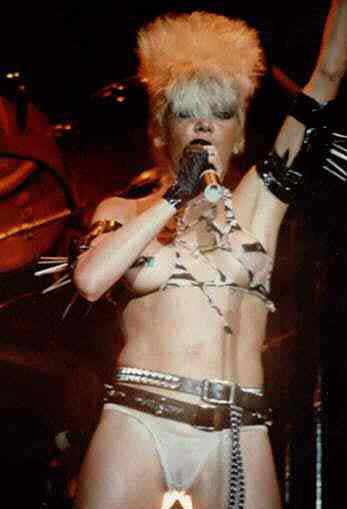 Hungry for more? Check out the documentary “Wendy O. Williams and The Plasmatics – 10 Years of Rock and Roll“.