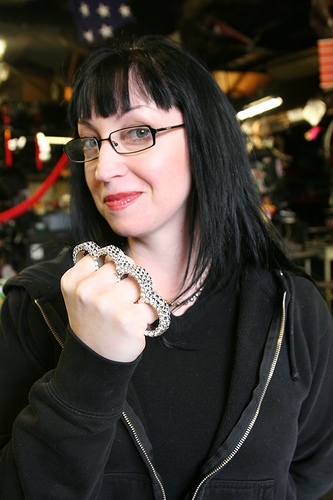 Wow, this is amazing. My good friend and co-conspirator Violet Blue has just informed me that she is now the new sex columnist for the San Francisco Chronicle. Her column, “Violet Blue: Open Source Sex” will run in the paper every Thursday and debuts on September 21st. See her blog post for the full story on how this all happened.

Not just ‘plucked’ from the blogosphere to freelance for a 141-year-old mainstream media institution; Phil Bronstein hand-selected me to be their frontline sex writer, with a column and everything that comes with it. I just got home from the Chronicle building — today was the final meeting with the PR department, and to set the launch date (I wore my Laughing Squid t-shirt to the meeting). At one point David Wiegand said, “We’re just making sure it’s okay before we plaster your face on buses.” I don’t remember my reaction to this, though my memory tells me I shrieked like a little girl and ran in tight little circles with clenched fists tight against my sides in the middle of the circled chairs of Chron/SFGate staff. I think I actually said “yikes” in an extremely composed way. I’m pretty sure he was teasing. Ulp.

So in addition to her new role as the San Francisco Chronicle’s sex columnist, Violet is also a published sex author, a ten year veteran of Survival Research Labs, a podcaster and a blogger for both Fleshbot and Metroblogging San Francisco.

Congratulations Violet, for “crashing the party”. Also kudos to the Chronicle for making such a bold and riskly move. You’ll be glad you did.