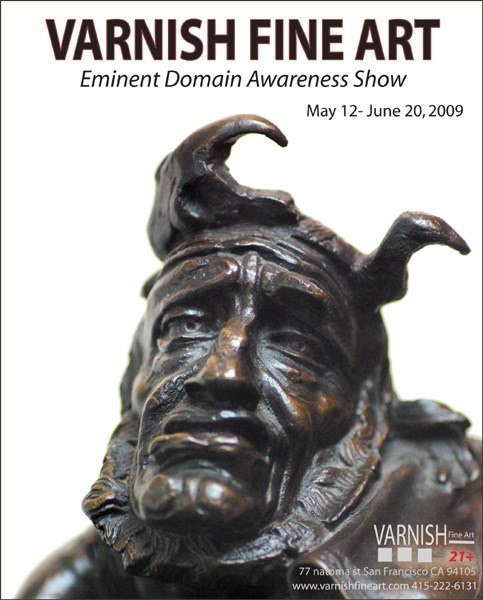 Our friends at Varnish Fine Art are being forced out of their beautiful gallery by San Francisco’s Transbay Joint Powers Authority, along with several other local businesses and residences in the area. This Friday, June 5th they are having the opening reception for their Eminent Domain Awareness group show which features some of the amazing art that has been shown in their gallery over the years.

Join us for an evening of spoken word, live music and art as we raise awareness about Eminent Domain in our neighborhood. Few know that a San Francisco agency, the Transbay Joint Powers Authority, is eliminating 33 small, local businesses, including Varnish, and numerous residences in order to demolish all properties and later resell the land. The TJPA is forcing Varnish, among the first tenants and years before the end of the lease, to vacate this September for an October 2009 demolition of its nearly 100 year old building. This gallery and wine bar will have to vacate 77 Natoma Street, but the owners hope that by raising awareness about this eminent domain threat they can stop its abuses on this and future San Francisco projects.

The art show will be up May 12th through June 20th.