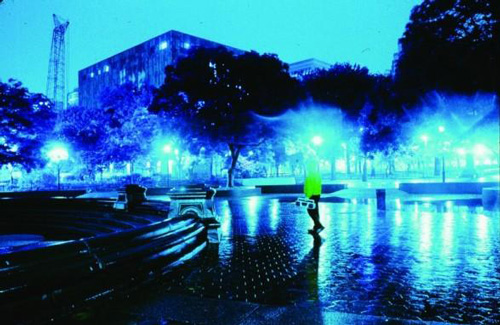 This Saturday, December 23rd, New York composer Phil Kline will be leading the performance of San Francisco’s 4th annual Unsilent Night, a massive outdoor concert made up of hundreds of people with boomboxes. Participants will be gathering at 7:00pm in Dolores Park and will work their way through the Mission and Noe Valley to the Castro. Dig out your boombox or other music amplification device and join the mobile sound system orchestra in breaking the holiday silence.

A beautiful, mobile piece of ambient public art, Unsilent Night can be compared to a holiday caroling party — except that participants donâ€™t sing. Instead, each carries an ordinary boombox playing a separate cassette, CD or MP3 that becomes part of the piece. In effect, Kline and his co-performers become single elements in a huge, moving sound system. Performed within the confines of the city streets, Unsilent Night reverberates off the cars and buildings, resulting in a magnificent, drifting cloud of shimmering, echoing sound. The 43-minute piece includes sounds of chiming bells, choral voices and various electronic effects. (Kline cites Brian Eno and Charles Ives among his influences.) Kline has performed Unsilent Night in New York City every year since 1992. In San Francisco last year, some 500 people took part. If you havenâ€™t taken part yet, do it this year! Participants are invited to bring a boombox to Mission Dolores Park at 18th and Dolores Streets in San Francisco, gathering at 7:00 PM. After Kline distributes tapes and CDs among the players, the group will begin the piece, strolling a mile-long route though the Mission, Noe, and Castro districts. The event will be held rain or shine.

UPDATE: Here’s a video I shot of the event.