Architecture and art collective Ant Farm were no ordinary group of building designers. Formed in 1968 by Chip Lord, Curtis Schreier and Doug Michels, Ant Farm’s name was a metaphor for “underground architecture”. Ironically their most famous work Cadillac Ranch (1974) protrudes noticeably from the ground. The new film “Space, Land and Time: Underground Adventures with Ant Farm” by Elizabeth Federici and Laura Harrison directs long overdue attention to the group’s work and legacy. The trailer for the film gives a taste of Ant Farm’s energy and attitude which set the tone for so much culture jamming that followed.

Here’s co-director Elizabeth Federici at the Sonoma International Film Festival where the film screened earlier this year. Michels, who died in 2003, was involved in the project early on–the film has been more than a decade in the making.

Ant Farm’s work anticipates all kinds of conceptual art and pranks, including The Yes Men, Improv Everywhere, Burning Man, and The Cacophony Society. In fact Gary Warne who founded The Suicide Club, the progenitor of The Cacophony Society, was a participant in Ant Farm’s Media Burn event in which a modified Cadillac crashed through a pyramid of television sets. Twenty years later, The San Francisco Cacophony Society would have it’s own “Kill Your TV” event. On July 4, Independence Day, 1975, what a TV newscaster described as a “media circus” assembles at San Francisco’s Cow Palace Stadium. A pyramid of television sets are stacked, doused with kerosene, and set ablaze. Then a modified 1959 Cadillac El Dorado Biarritz, piloted by two drivers who are guided only by a video monitor between their bucket seats, smashes through the pyramid destroying the TV sets.

The Media Burn event was held at San Francisco’s Cow Palace and also featured a revitalized John F. Kennedy (who had been killed 12 years earlier) making a speech to the crowd, and a prominent souvenir stand. Here’s video of Media Burn:

The original 30-minute Media Burn video produced by Ant Farm has more footage of the event, car design details, the full Kennedy speech, and more TV coverage. It is hosted at MediaBurn.org an online video archive run by Ant Farm co-conspirator Tom Weinberg. He and the Ant Farm guys were also part of a San Francisco video collective called Top Value Television (or TVTV) whose members included Harold Ramis and Bill Murray (prior to his debut on SNL). Cadillac Ranch was created in 1974 in Amarillo, Texas. It features ten Cadillacs, ordered by model year from 1949 to 1963, set in the ground at an angle corresponding to that of the Great Pyramid of Giza in Egypt. The cars have been in place for nearly 4 decades, and Cadillac Ranch, which is visible from Highway 40, has become an iconic piece of America’s roadside mythos.

The original look of Cadillac Ranch is long gone, due to decades of exposure to the elements and even more so to the thousands of roadside travelers who have removed pieces and added graffiti over the years. But the fact that Ant Farm didn’t encase their work in a sterile environment, and instead left it open to the public at large reflects their architectural foundations. After all: space, land and time are all factors of how Cadillac Ranch has evolved. And people. And all forms of use (including ab-use) are to be expected when Time and people are variables. And the 15,000+ photos on Flickr are a testament to how visitors to the Cadillac Ranch cherish the venerable roadside attraction. Our own Scott Beale took a set of photos of Cadillac Ranch while driving cross country last year. The ranch has also spawned a string of copycats from VW Slug Bug Ranch to “Airstream Ranch” to Australia’s Utes in the Paddock. 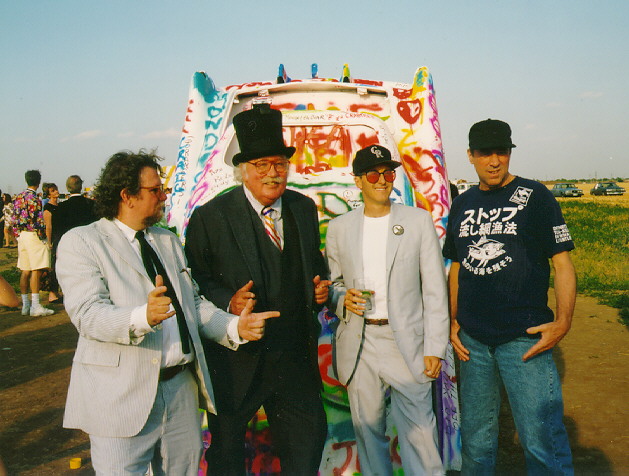 The group has re-emerged somewhat in recent years. The book Ant Farm: Living Archive 7 came out in 2008, and Ant Farm itself (now composed of Lord, Schreier, and Bruce Tomb) has participated in exhibitions in San Francisco at SFMOMA in 2008 (part of the Art of Participation exhibition) and Southern Exposure Gallery in 2009. Both exhibits related to their earlier Media Van project which began in the past (1970), then in the “present” of 2008-2009 they collected media files at random from museum visitor cameras & phones for a time capsule to be opened in the future (2030) for another exhibit at SFMOMA. In 1975 they also created a Citizens Time Capsule which was due to be unearthed in 2000.

Ant Farm’s work was sometimes specifically and radically predictive. We don’t yet know if Doug Michels’ prognostication of an outer space “think tank” featuring a giant sphere of water and a super computer programmed by dolphins will come to pass. But he called it BlueStar and had thought it out extensively. Here’s Tom Weinberg presenting a compilation of videos featuring Doug Michels, including extensive details about Bluestar:

Here are a few more links on Ant Farm:

Thanks to Ken Duffy for the tip!