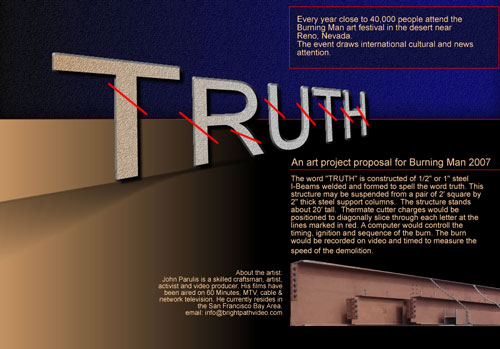 John Parulis is currently planning the Truth Burn Art Project for Burning Man 2007, which involves creating a large steel frame columns on the playa that suspend the word “Truth” and then destroying the structure with thermate using trained explosives specialists. The purpose of the installation would be to generate awareness of unanswered questions surrounding the attacks of September, 11th 2001.

The “Truth Burn” Project is an attempt to refocus the National gaze on a specific side of this event- the actual theoretical mode scientists and engineers have proposed for what really brought down the world trade towers and building 7. This would be the use of explosives and the steel burning incendiary called “thermate”. Traces of this substance were found at ground zero. We donâ€™t plan on using explosives but we do plan on using thermate. By using a controlled demolition technique to destroy this artwork, we hope to provoke a wider examination about what really happened that day in September. We also want to demonstrate the speed and destructiveness of the incendiary, in a test use of the method to bolster the controlled demolition theory of a growing body of scientists, engineers and other professionals.

John is currently looking for volunteers, funding and support for the project.

UPDATE: Burning Man has given final approval for Truth Burn for this year’s event.