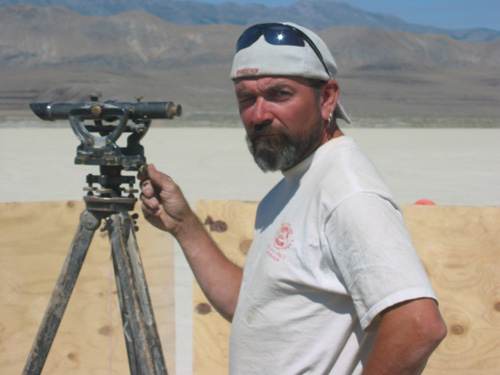 Tony Perez aka “Coyote”, BRC-DPW co-founder and site manager, was brutally attacked recently on his way home in the Lower Haight.

On the morning of February 1st, on his way home from the (Last) DPW Treat Street Social, Coyote was attacked and badly beaten by a street gang just a few blocks from his home. He will need reconstructive surgery on his jaw and wrist. To help him with these medical expenses and the loss of income from the necessary recovery time I’ve set up a paypal account for donations. Please click on the link and make a contribution if you can. Or send your check to (made out to Tony Perez):

Coyote is the man responsible for building and tearing down Black Rock City at Burning Man and is also a talented musician. Best wishes Tony! We hope you have a speedy recovery and are back playing the sax again soon.

UPDATE 1: Here’s an account of what happened from Coyote himself:

“Hatred – it’s the only thing that lasts.”
A quote from Charles Bukowski’s “Bar Fly” movie, spoken by the character played by Micky Rourke. He sort of half whispers it in his thinking out loud voice as he listens to the husband of the married couple next door kick the shit out of his wife in their fucked up deep city hotel room.

Hatred is the spawn of massive insecurities that gets beaten into the forsaken. Their self esteem is a black blood that flows from a jugular cut early. Those that have something to prove lash out. They travel in packs and prey on the hapless to fortify their worth like bullies at recess. It’s a chicken shit fast track validation to manhood. It can be bought for $19.95 on late night TV. And now, the hatred of these modern day bullies of our streets has become murderous.
Guess they had nothing better to do.
They were trying to kill me.
They didn’t even rob me!

They were laughing about it.

As I hole up here in my apartment, it is an overwhelming thing to experience the out pour of love from my comrades. Hatred and injuries are a lonely thing. Can’t tell you how warm a light it is in my cave of hurt to feel such concern from you. I love you all –

So, a brief report of what happened.
Got a ride home from the DPW social at the Treat St. bar Wed before last. Got dropped off on Laguna and Haight with two blocks to walk home. No biggie, right? Walking up the street, I notice a group sitting on a stoop. Probably eight of them or so. Only thing that I thought was that it looked past their bed time – teenagers at best. Ten paces up the street, I was hit from behind and was drilled to the pavement. Then it was fists, knees, and full kicks. The kicks to the mouth were the ones that got my attention. Haven’t been playing sax lately. They were just getting started, when a car slowed. They scattered. I got home somehow. I’m missing an hour and a half of my memory. There were bloody hand-prints on my stairs the next morning. Guess I crawled up them.

My guardian angel drives a car at night.

A cheek bone was shattered, a re-broken wrist, kicked in mouth with loosened teeth, a jammed and tweaked jaw, and a pretty high and proud shiner, and cuts and bruises throughout. Even the bartenders think I’m a thug now.

I want to send a huge love and thanks to Will Roger and his posting and all who are responding to my situation. The love is simply overwhelming!! I will be laid up for some time, and rent just doesn’t seem care. I have another job that I work in the off-season as an independent contractor with Bedrock Construction, but will be unable to swing a hammer for several weeks. I have long ago set up my own insurance plan with Blue Cross which has been pretty pricey, but I choose this rout several years ago. Year round employees of
Burning Man are given the option of an insurance plan and this was offered to me a while back, but I had already had my Blue Cross plan by then. My plan will be covering a good deal of the operations, but of course, in this country, there’s no such thing as absolute coverage. (Don’t get me started!!) And with a bill that’s sure to top $200.000, you always get stuck with thousands in the end. Better than hundreds of thousands, I guess.

Bottom line, I’m just glad to be alive and kicken, and not another number sitting on the Police Chief’s desk. That shit doesn’t even make the papers, you know. And I can’t tell you the depth of warmth and love that I feel from all ya’ll who form this close net of our peeps! My heart soars!

I’ll save the tears for our beers.

photo by unknown (if this is your photo, let us know so we can give you proper credit)