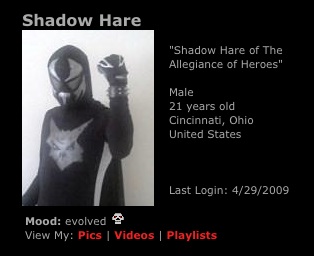 Superheroes are real and many of them happen to have MySpace pages. Fortunately, if you are in need, you can access the World Superhero Registry, which aggregates the bios and contact info for many real life costumed superheroes. The Registry even goes so far as to identify if their heroics are confirmed or not.

For example the Shadow Hare of The Allegiance of Heroes in Cincinnati was recently injured when preventing a man from beating a woman. 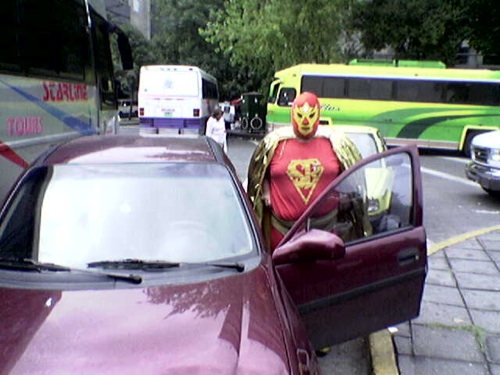 Superbarrio Gómez does not use violence, but actually may be placing himself at more risk by being a labor organizer and forced evictions in Mexico. As I used to do similar work in Cambodia, sans spandex and cape, I can attest to the very real risk that local organizers like this take.

More locally, we have The Eye who uses “various self-created electronic devices and other means to prevent crime, and help others in need whenever and wherever possible.”

No matter how they do it, I have to respect the fact that these individuals have the courage to not just face crime, but also the flaws in society (as they perceive them). Just like all the pranksters we profile here at Laughing Squid, these folks aren’t taking reality sitting down. As Ghost, one of the co-founders of the Black Monday Society, says “Doesn’t matter how many people snicker at us. what matters is we are out there doing our duty for justice.” Good on them.