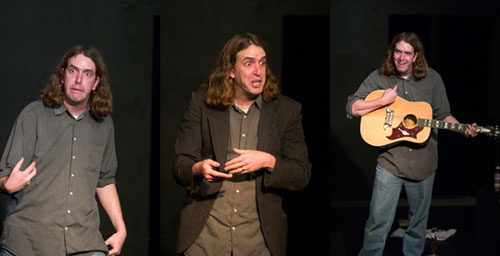 Laughing Squid presents Will Franken in “The Will Franken Fringe Benefit”, consisting of two completely different shows, one on Friday, June 24th and another on Saturday, June 25th, both at The Dark Room in San Francisco. Each show starts at 10pm and the admission is $10.

Will has been invited to the New York Fringe Festival and needs help getting there, so it’s time for a fundraiser. Will has appeared in numerous Laughing Squid events in the past and is one of our favorite performers in San Francisco. The guy is funny. You just need to see him in person, since his act is pretty much impossible to describe, although some people have given it their best shot. Will was recently named “Best Comedian” in SF Weekly’s Best of San Francisco 2005 issue.

Here’s Will’s explanation of his situation and why the need for a benefit:

I have been selected to participate in the New York Fringe Festival with one of my one-man shows. Unfortunately, this whole adventure, though a potentially rewarding career move, is financially demanding. Aside from the $500 acceptance fee, I also have to buy all the props that I can’t take on a plane, hire a tech guy out East, and cough up the money for airfare. The truth is my wife and I are bordering on destitute at the moment, but we both realize that in order to break through in the long run, I’m going to have to get a foothold in New York by representing San Francisco in this festival. Hence, we have the Will Franken Fringe Benefit. Two different shows over two different nights. Over these two nights, I’m going to passionately blast through some of my most well-known, rarely performed, and never-performed bits. If you missed last April’s “Good Luck With It” at the Marsh, I will be reprising parts of that show as well as some of my favorite sections from my earlier one-man shows. As always, there will be plenty of new material. Please, I beg you, if you’ve ever seen me before and dig what I do, please come down these nights and help me get to New York. We’ve never needed money this bad before and this is the time in our life where we definitely need one of those “Last scene in It’s A Wonderful Life” moments where everybody comes in with wads of cash.