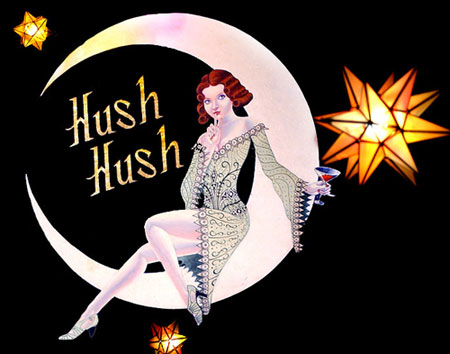 After many great years, our friend Kim Jordan is closing her popular bar The Hush Hush Lounge. This Saturday, August 13th will be the last night it is open, however tonight, Thursday, August 11th, the veterans of The Odeon Bar including Chicken John, Hal Robins, Zoli (Yoni Wannalea), Freddi Price, Jascha Ephraim and Chris Campbell (who all know a thing or two about bar closings), will be doing a big farewell show at the Hush Hush. The Hush Hush is located at 496 14th Street near Guerrero in San Francisco and tonight’s show starts at 10pm with an admission of $5.00.

Friends of the Hush-Hush Perform on Bar’s Last Thursday

Thursday, August 11th marks a special day in the history of the Hush-Hush, the popular little bar at 496 14th St. just off Guerrero. Since the Odeon closed its doors months ago, seekers of out-of-the-ordinary Variety Arts entertainment have sought for it there, in Kim Jordan’s unique establishment. But now this famed night spot too is preparing to close. Although Saturday the 13th will be the actual last business day, Thursday’s farewell party will be the real event not to be missed– an unprecedented Olympic send-off from the irregular regulars of the beloved Odeon bar and grill, including a number of surprise guests…

Now, you have one final chance to experience the former Odeon headliners once again in their element. Yes, that legendary cluster of maverick minstrels, performing under the sobriquet of the Odeon Cocaine All-Star Band, will reappear to punctuate another episode as a memorable era draws its final breath.

Dr. Howland Owll, late of the quasi-legendary Ask Dr. Hal show, will lend his vocal talents to the enterprise, singing tunes of weird Americana and SubGenius sacred songs. On lead guitar, Chicken John will produce notes of spun silver, while Jascha Ephraim will ground the set with his patented maniacal bass guitar technique. Chris Campbell’s rhythmic reverberations on the drums will provide the pulsing heartbeat of the musical juggernaut, and Freddi Price will contribute astounding musical shadings on varied instruments– as only he can. Ladies and Gentlemen, this is a one-time opportunity to participate in a significant moment in the annals of San Francisco’s demimonde, a time to see some familiar faces from the past once again, before the flickering flame of a vanishing era is extinguished forevermore.

That’s right! Not only will Hal sing, and Chicken sing, but in the course of the evening, musical pineapple juice will be doled (heh, heh) out a-plenty by the redoubtable duo, Wink Payne and Yoni Wannalayya! A cascade of sugary, beyond-Don Ho-style melodies will wash like a lyrical tsunami over the attendees, courtesy of those two lovable, lecherous, loose-as-a-goose lounge lizards.

SEE! Jascha Ephraim play the bass guitar like one possessed!

HEAR! Dr. Hal croon twisted C&W songs as if he really was some demented Bakersfield redneck!

FEEL! the crushing horror as a half-dozen of your friends lose their jobs!

SWOON! to the melodious, melodramatic and out-of-tune guitar “bling” of Chicken John!

WEEP! as Yoni Wannalayya steals your heart, your drink and your girlfriend!

ROCK! to the rythmic undulations of precocious percussionist Chris Campbell…

CRINGE! as Wink Payne sings that song about the spoon-nose thing… You just know he will…

Show starts at 10:00 PM. And for this phenomenal, unprecedented outpouring of unheard-of talent, audited and beheld at the absolute pinnacle of human striving and folly, the management only asks a minimal, pathetic cover of a mere, paltry, tawdry

Yes, Five Measly Dollars. Wotta bargain, eh? Less than the price of a halfway decent Mission burrito. But, come on– you don’t need the burrito. You need to get yourself down to the Hush-Hush, at 496 14th St., to take in a Musical Act for the Ages– and to say goodbye to Kim before she (groan) moves back to Baltimore! You always knew it was all too good to last…