This year marks the 40th anniversary of one of my favorite films, Little Murders starring Elliott Gould. It was the first feature film written by Jules Feiffer, best known for his Village Voice comic strip “Feiffer“, and the directorial debut of Alan Arkin, who also appears in the film. I found this quote from Jules Feiffer on a review of the Little Murders DVD:

Little Murders was conceived as an essay on what I perceived to be going on in America in the mid-1960s…’inspired,’ if you will, by the assassination of JFK and the shooting of Oswald a week later. The post-assassination climate of urban violence made me realize this country was in the process of having an unstated and unacknowledged nervous breakdown. All forms of authority which had been previously honored and respected, on every level of society, were slowly losing their validity.

Little Murders was originally a play, starring Gould and directed by Arkin off-Broadway. It is a comedy, but a very dark comedy, set in a New York City where that kind of terrorized living has become the norm, even mundane. Roger Ebert wrote in his review at the time:

It falls somewhere within the category of satire, but Arkin has been careful to keep the satire within very tight and self-consistent boundaries. This isn’t the kind of satire that lets up occasionally, that opens a window to the merely ridiculous (as Dr. Strangelove did), so that we can laugh and relax and brace ourselves for the next stretch of painfulness. No, Little Murders is entirely self-contained, and once you get inside it, you’ve got to stay.

Jules Feiffer learned the cartoonist’s craft from the great Will Eisner as a 16-year-old assistant on The Spirit. Eisner then gave him space to draw his own comic strip at age 18. Feiffer went on to win the Pulitzer Prize for Editorial Cartooning, the lifetime achievement award from the National Cartoonists Society, and was elected to the American Academy of Arts and Letters in 1995. His work appeared in The Village Voice for 42 years beginning in 1956, and his collected comic works are available from Fantagraphics. He has also won an Oscar and an Obie, amongst many other honors. 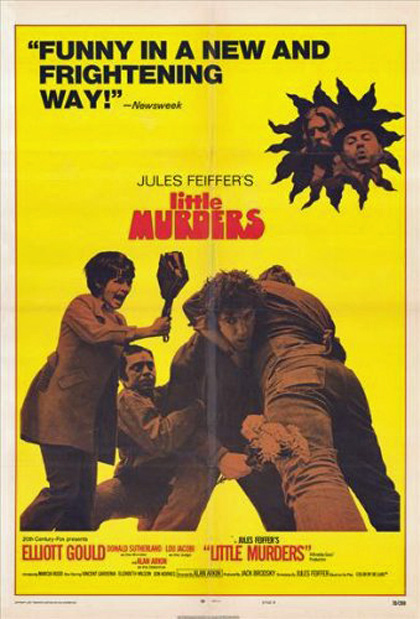 Little Murders is also remarkable for the brief supporting performance by Donald Sutherland (his first collaboration with Gould since 1970’s MASH). Sutherland plays a minister in the very unusual “Ethical Culture” church (which is apparently a real thing) and performs a truly bizarre wedding ceremony.

Finally here’s Elliott Gould in an incredible scene about getting his phone tapped due to “protesting a little bit” in college: