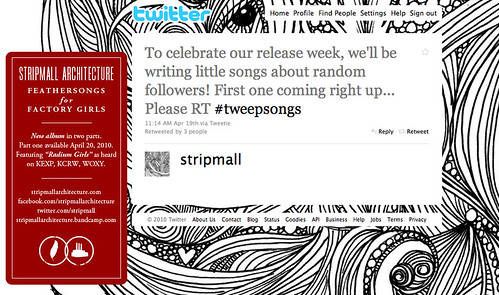 To celebrate the release of their latest album, “Feathersongs for Factory Girls”, the San Francisco band Stripmall Architecture is spending the week composing a series of “tweepsongs”: original songs inspired by randomly selected followers of the band on Twitter.

Appropriately Twitter-like in their brevity, each tweepsong offers a playful, pithy riff on some aspect of their chosen subject. For example, there’s @tigerbeat, who “has an @ reply in every tweet” and @loribot who “likes entertainment you can read”. But my favorite thus far has to be the tweepsong they composed for @reaktorlovers, a Twitter account for users of Reaktor, a popular music synthesis application. Over a Stephen Merrit-esque acoustic guitar melody, singer Rebecca Coseboom admits that “Reaktor lovers are great / but this is not Reaktor / It was played by a twelve year old”.

A CD release party and performance for “Feathersongs for Factory Girls” will be held this Friday, at Cafe DuNord. 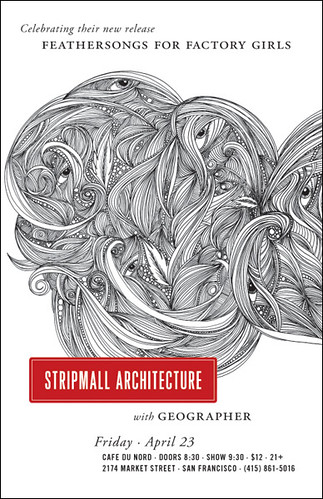 Full disclosure: Stripmall Architecture randomly chose to write a tweepsong about me, with resulted in this charmingly honest lyric: “VFX artist / Polyglamorous / Culture evangelist / Not sure what that is.”

Come to think of it, neither am I sometimes.