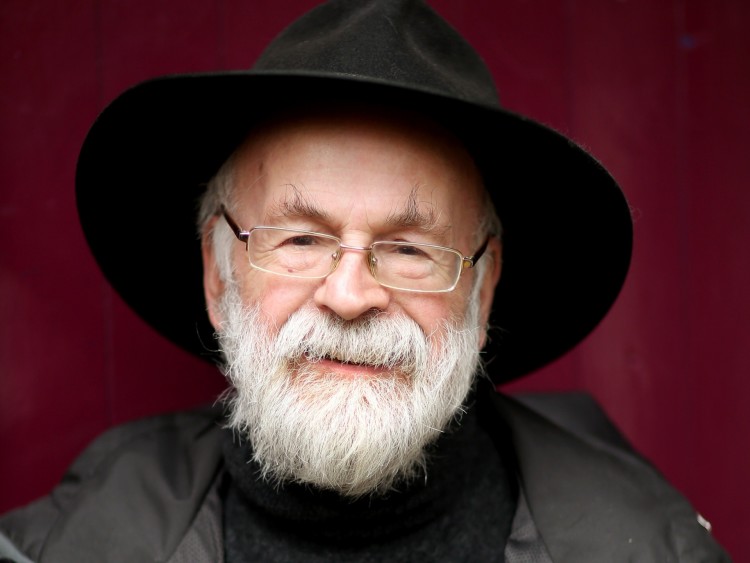 So much universe, and so little time.

Prolific fantasy author Sir Terry Pratchett, best known for his Discworld books, passed away today at the age of 66 after a battle with Alzheimer’s disease. A statement released by his publisher says that Pratchett “passed away in his home, with his cat sleeping on his bed surrounded by his family.” Until being overcome by J.K. Rowling, he was the best-selling author in the UK during the 1990s, and over 85 million of his books have been sold worldwide in 37 languages.

AT LAST, SIR TERRY, WE MUST WALK TOGETHER.

Terry took Death’s arm and followed him through the doors and on to the black desert under the endless night.

His daughter, writer Rhianna Pratchett, issued a moving statement of thanks for support via Twitter.

Many thanks for all the kind words about my dad. Those last few tweets were sent with shaking hands and tear-filled eyes.

Writer Neil Gaiman, a friend to Pratchett who co-wrote Good Omens with him, wrote a powerful piece last fall about how Pratchett’s anger and love fueled his writing.

Terry’s authorial voice is always Terry’s: genial, informed, sensible, drily amused. I suppose that, if you look quickly and are not paying attention, you might, perhaps, mistake it for jolly. But beneath any jollity there is a foundation of fury. Terry Pratchett is not one to go gentle into any night, good or otherwise.

He will rage, as he leaves, against so many things: stupidity, injustice, human foolishness and shortsightedness, not just the dying of the light. And, hand in hand with the anger, like an angel and a demon walking into the sunset, there is love: for human beings, in all our fallibility; for treasured objects; for stories; and ultimately and in all things, love for human dignity.

Pratchett was quite public about Alzheimer’s—which he called an “embuggerance”—and spoke about assisted suicide and the rights of terminally ill people in the lecture “Shaking Hands With Death.”

Donations can be made online to the Research Institute to the Care of Older People (RICE) in his memory.