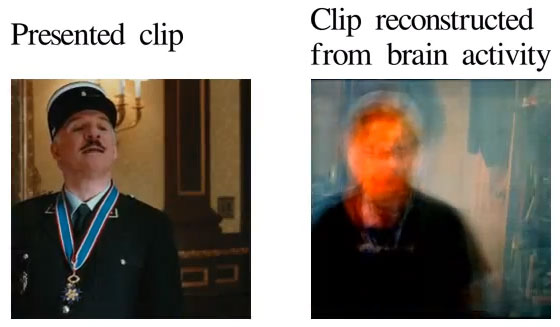 Researchers The Gallant Lab at UC Berkeley have developed a method to read and reconstruct the mental images that play in a person’s brain. In this astonishing video demo of their method, the image on the left is the original video shown to test subjects, the image on the right is a computer reconstruction of the original video based solely on the test subject’s brain activity. Woah.

A second video demo by researchers shows the process for creating the computer reconstructed brain movie from a library of 18 million one second YouTube clips.

As you move through the world or you watch a movie, a dynamic, ever-changing pattern of activity is evoked in the brain. The goal of movie reconstruction is to use the evoked activity to recreate the movie you observed. To do this, we create encoding models that describe how movies are transformed into brain activity, and then we use those models to decode brain activity and reconstruct the stimulus.