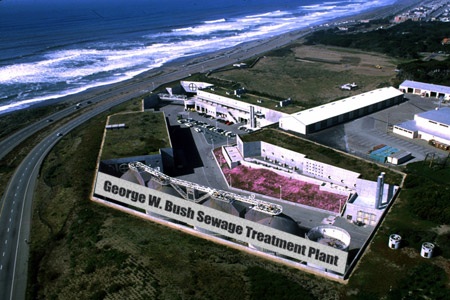 The Presidential Memorial Commission is a group of San Francisco citizens, including ex-mayoral candidate Chicken John, who are submitting an ordinance initiative for the ballot in the November election in San Francisco to change the name of the Oceanside Water Pollution Control Plant to “George W Bush Sewage Plant”. Chicken is currently leading a signature drive in order to get the 15,000 signatures of registered voters required for the petition to add this to the ballot.

OK. So today you get to live in the City of Art and Innovation. And by being a good citizen of San Francisco, I implore you to take action.

We have a ballot initiative that you will be able to vote on come November 2008.

We have put forth the following question to all San Fraciscans:

Presidential Memorial Commission Signature Drive is now in full swing. Like 15,000 signatures are needed to make this happen. That’s 15,000 signatures of San Francisco residents who both live somewhere and are registered to vote AND know the address of where they are registered to vote and can remember how to sign their names because the Election Commission checks each and every signature.

I need all of you (who live somewhere and are registered to vote) to sign. But that’s not enough. I need all of you (that’s ALL of you) to activate. I need a bunch of you to commit to collecting 50 signatures. It’s easy. In the next month you get 50 people you know to sign a ballot initiative form that takes 20 seconds. You know 50 people. Easy. Your work, your roomates, that party you’re going to… in no time at all you’ll be a functioning citizen of the City of Art and Innovation.

Write me an email, I’ll mail you a canvassers button and email you the PDF forms. Easy. But ya hafta do it.

After running for mayor, I can assure you this is a much better way to spend your time activating to local politics. And since we are not collecting a dime, the ethics commission can’t toy with us.

Just write me an email and tell me you wanna help get some signatures together. We’ve got like 1,200 so far. But likely 50% of them will be rejected.

This from the accurate and astute Fox News Network:

Virginia-born activist and ordained minister John Rinaldi, a co-sponsor of the petition who ran unsuccessfully for mayor last year under his nickname “Chicken John,” said the initiative would turn “every toilet in San Francisco into basically a shrine for George W. Bush and all his great achievements in his eight years as our commander in chief.”

Rinaldi — flush with pride about the idea — said renaming the plant is “the highest honor available to us.”