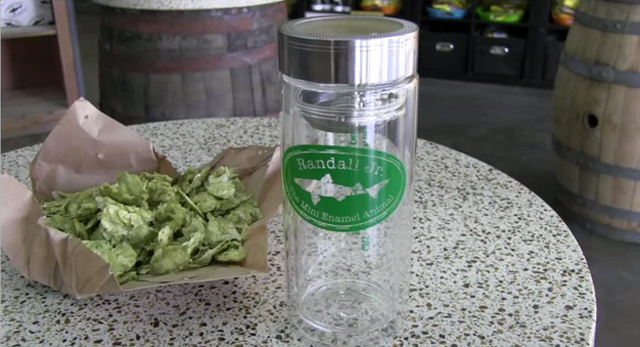 Randall The Enamel Animal is a filtering system (an “organoleptic hop transducer module” to be exact) to infuse flavors into beer created by Dogfish Head Beer. The original Randall was released in 2010 and in April 2012, a portable model called the Randall Jr. Mini Enamel Animal was announced. The Randall Jr. promotional video is pretty funny.

This is what Dogfish Head founder Sam Calagione had to say about the Randall 3.0 release in 2010:

“I’m really excited to announce Randall 3.0. This is the new double barrel, foam-reducing model. Randall the Enamel Animal is the original gangster organoleptic hop transducing module. Basically, it’s a sophisticated filter system that allows the user to run draft beer through a chamber of whole leaf hops, spices, herbs, fruit, etc. so that the alcohol in the beer strips the flavor from whatever you add and puts it in the beer.”