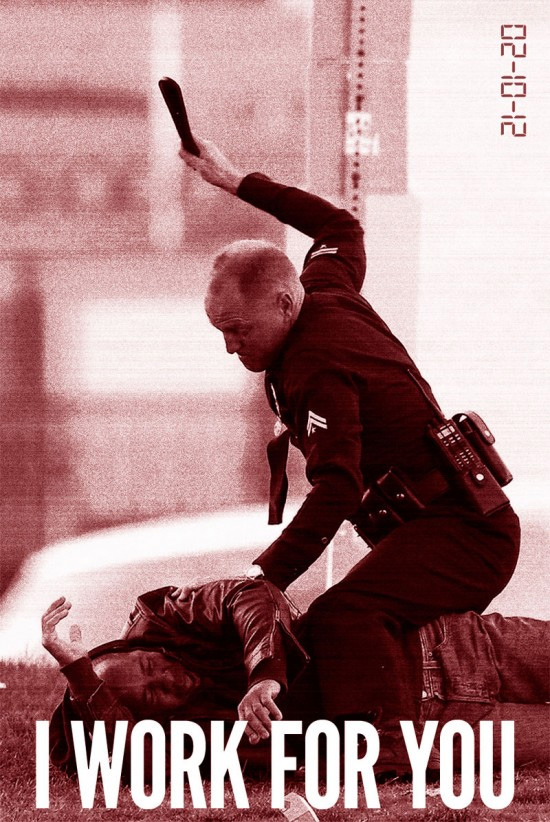 The marketing team behind the upcoming movie, Rampart, have been pasting up controversial posters in several major U.S. cities showing Woody Harrelson’s character, Officer Dave Brown, beating a man with a night stick. The posters simply say “I WORK FOR YOU” with the opening date and are meant to look like street art wheatpaste posters. The film opens February 10, 2012.

The poster was Lawrence Inglee’s idea. He’s one of the producers of Rampart and he was searching for an image that would be thought-provoking and challenging, not an indictment of a cop but rather a communal approach to the idea of policing, the idea that maybe when cops do bad things it’s more of a reflection of society and what it is willing to tolerate rather than the fault of one bad apple or an institutional problem. If they work for us, could it be they ARE us?

Officer Dave Brown (Woody Harrelson) is a Vietnam vet and a Rampart Precinct cop, dedicated to doing “the people’s dirty work” and asserting his own code of justice, often blurring the lines between right and wrong to maintain his action-hero state of mind. When he gets caught on tape beating a suspect, he finds himself in a downward spiral as the consequences of his past sins and his refusal to change his ways. Brown internalizes his anguish as his world, complete with two ex-wives who are sisters, two daughters, an aging mentor, investigators, and a series of seemingly random women, starts making less and less sense.