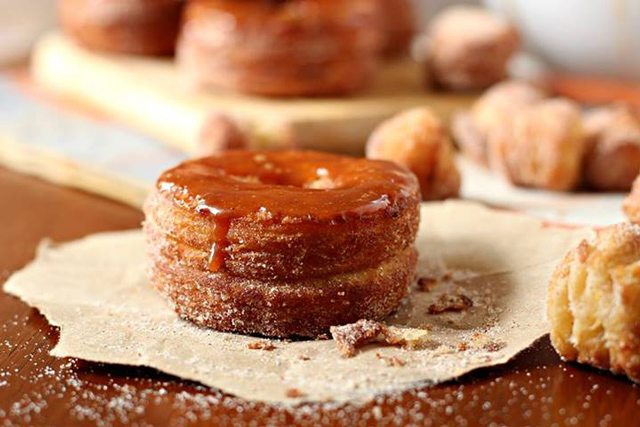 For his Pumpkin Spice Caramel Cronuts, Gerry of the food blog Foodness Gracious has combined caramel and the popular Fall pumpkin spice flavor with the donut/croissant hybrid called the cronut. More mouth-watering photos of his special cronut and its recipe are available at his site.

The dough is the texture of croissant dough, packed with butter and folded over and over again to produce those flaky layers. If you’ve ever made croissants, you know how much labor goes into this. But it’s like a science experiment – if it goes right, then it’s soooo worth it. Of course, if it goes belly-up like mine did the first time, then it’s a kitchen full of flying flour and cuss words…Umm, yeah I’ll be making them again because it was like stuffing a raised donut into my mouth while also relishing crispy layers of butter and pumpkin spice sugar. And as if that wasn’t enough sweet goodness, I dipped them all in caramel sauce. Let’s not forget the middle of the cronut. Those little puffy balls rolled in the sugar were more addicting than I imagine crack to be.