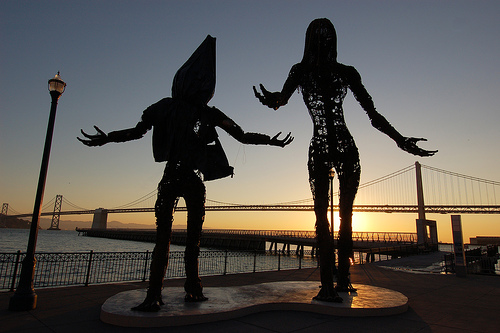 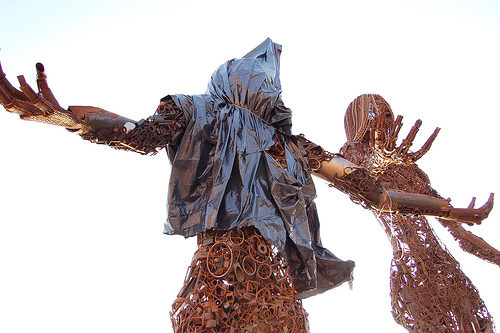 Dan Das Mann and Karen Cusolito’s “Passage” sculpture on San Francisco’s Embarcadero at Pier 14 and been targeted by pranksters again. First there was the “bong & lighter prank” last month during Burning Man. Then last night or early this morning the smaller figure was covered with some kind of tarp, tied by a string. Nina Alter was down at the Farmer’s Market and came across the scene and and shot a few early morning photos. It appears that this is either just a half-assed Halloween costume or as Nina suggests an Abu Ghraib style prisoner. It’s not quite clear.

As with the previous modification, no one has yet claimed responsibility and it is not clear if the same person or people were involved this time around as well. It used to be that public acts of detournement were accompanied by a statement or even a press release, a tradition pioneered by the Billboard Liberation Front.

UPDATE: Violet Blue has also posted about this prank over at Metroblogging San Francisco.