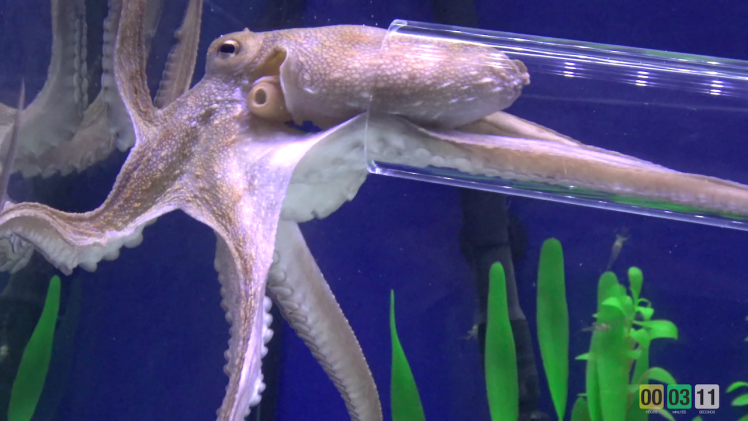 A very playful octopus named Rudy at the Octolab (previously) was given the challenge finding the method egress in specially designed, increasingly difficult escape rooms. Rudy tackled the first room (hidden door) in a bit over a minute, the second room (tube) in a little more than three minutes, the third room (bridge) in almost four minutes and the fourth room (button) in six and a quarter minutes. The octopus: Nature’s craftiest escape artist. Is this just another preconception? Is it fact or
is it fiction? We needed to design an experiment and test exactly how much skill a smart octopus would display in order to escape from a confined environment. So we sat down and devised the first-ever escape room for an octopus. After all, escape rooms are great fun! If they are stimulating and entertaining for us, wouldn’t they be
equally beneficial for an octopus?

Rudy was so successful an escape artist that appeared he wanted more to solve.

Rudy surely enjoyed his new playground enormously. He was excited and could not wait for the next challenge to be set up. It was as if he wanted to show us how intelligent and crafty he is.

As always, Octolab ensured that this experiment was completely safe for Rudy, keeping a sharp eye on his stress level.

As always, our main concern was to ensure that the experiment is 100% safe for the octopus. Moreover, we would not allow the octopus to stay in the escape room for more than a few minutes each round in order to eliminate the possibility of him getting stressed.