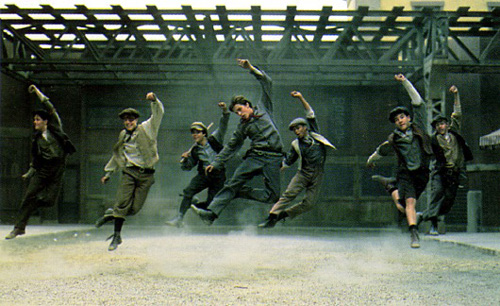 Forget about Zombies, singing and dancing 19th century newspaper boys is the new unstoppable meme. This Saturday, June 2nd newspaper boys and girls of all types will be meeting at 12 noon in San Francisco’s Union Square for a Newsies Flashmob. Based on the 1992 Disney film “Newsies”, the gathering newspaper boys will magically transport back to 1899 in New York City and will break out in spontaneous song and dance as they go on strike against Pulitzer and Hearst.

It’s 1899 in NYC and Pulitzer and Hearst have raised the prices of newspapers, enraging the already struggling newspaper boys. Inspired by recent strikes, the newspaper boys or newsies call a strike of their own, join forces and spontaneously sing and dance in the face of “the man”.

On June 2nd, 2007, a corner of San Francisco will become New York in the late 19th century and a mass of people (perhaps including you) will become Newsies.

If you loved the movie and the musical, if you find yourself singing “Seize the Day”, “The World will Know” or other tunes and if you’ve always wanted to be one of those paper boys/girls . . . this is your chance. The message that the Newsies have in their songs are very applicable today so keep that in mind as well.