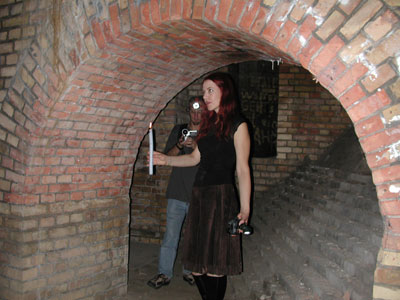 Selected Images: Below the Streets of New York

The worlds’ greatest metropolis is also home to the most extensive, mysterious and, only partially plumbed, man made subterranean landscape. Julia Solis has been exploring this world for years and, in her beautifully written and lovingly illustrated volume she shares much of the hard won lore and hidden history she has mined from the depths of Manhattan.

With the publication of her book New York Underground Julia Solis firmly takes her place as a leader in the historical research and documentation of this fascinating subject.

Julia has forged affiliations with some of the country’s most compelling figures and groups in the world of UE. Inspired by San Franciscoâ€™s protean UE group The Suicide Club, Julia formed the secretive exploration society Dark Passage in 1998. An officer of Brooklyn’s nefarious Madagascar Institute and an early organizer of The Los Angeles Cacophony Society, Julia was well prepared to embark on a career of exotic exploration.

Co-founder of New York City historical research and preservationist association Ars Subterranea, Julia continues to be an inspiration for anyone with the curiosity to wonder whatâ€™s beneath it all and the courage to take a peek.