It’s often said that those of us in the coastal centers of San Francisco and New York don’t know anything about the middle of the country. We fly over it several times a year, looking out the window on our six hour flights, and wonder what it is we’re looking at. Down below are mountains, rivers, geologic formations, strange man-made patterns… Cities, towns, highways… But what exactly are we looking at? What’s out there?

MondoWindow is a new site that aims to help you overcome this coastal elitism. If your flight offers Wi-Fi service, you can log in to the MondoWindow site from the air, type in your flight number and airline, and be instantly served a bunch of data on where you are. You get a zoomable satellite image of the terrain below you, with links to items of interest on the ground, pulling geo-tagged content from Flickr, Wikipedia and the site founder’s own research. 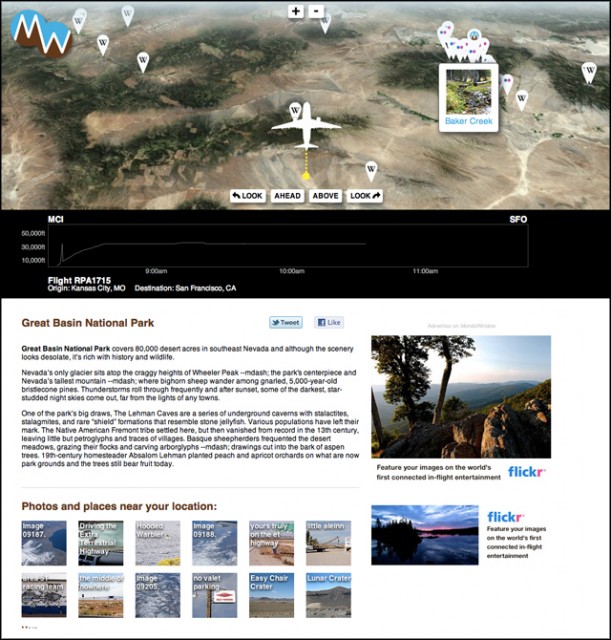 The site was co-founded by San Franciscan Greg Dicum, author of the amazing illustrated series Window Seat, which took a similar approach in book form. Says Dicum, “I have been dreaming about something like this for a decade, and I just cannot believe that not only does MondoWindow now exist, but that I’m one one who made it happen!” Dicum and co-founder Tyler Sterkel have only just launched the site, which they plan to develop further with additional social networking capabilities, games, and other content. At the moment the site covers only the lower 48, but it will soon include worldwide coverage.

You don’t need to be in the air to check out MondoWindow. Just choose a flight or a destination and you can see it in action. I can’t wait to try this the next time I’m on a flight!