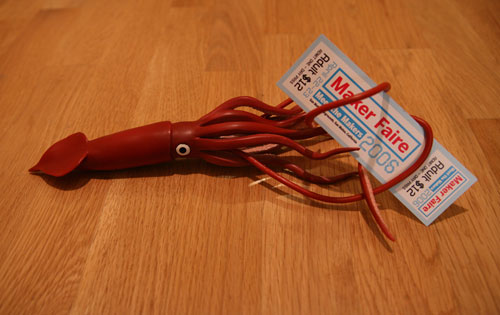 As a Maker Faire sponsor, Laughing Squid has a few extra tickets, so I thought it would be fun to have a little ticket giveaway contest.

Here’s how it will work:

1) I’ll ask some triva questions in this blog post about about a few of the Makers who will be at the Maker Faire.

2) The first person who leaves a comment on this blog post with the correct answer, will win a free ticket to the event. It’s an actual printed ticket (not electronic) and it is good for one day’s admission to the event, either Saturday, April 22nd or Sunday, April 23rd.

4) I’ll contact the winners for their mailing address so I can send them their ticket via US Mail. Make sure you include a working email with your answers in the comments. If a winner lives outside the Bay Area, then we may need to make other arrangements for their ticket.

Ok, on to the questions:

Question: What Mexican city has Cyclecide traveled to in the past for a giant pyrotechnics festival?

Question: Who is the artist that did the song that was sampled by ECC for “I Want A Cookie”?

Question: What unique food item was sold at both the Power Tool Drag Races and Robogames?

Answer: Either hot dogs or grilled cheese sandwiches, cooked with an iron.

Question: What was the original address of The Crucible before it moved to its current location?

Ok, you guys are pretty good. Time to crank it up a notch and make things a bit more difficult. I’m also swiching the format around to “guess the Maker”.

Question: Which Maker created a shirt made out of computer cooling fans to wear at Burning Man?

Question: Which Maker was involved with developing a toothbrush that can allow the person using it hear a song through vibrations of the teeth and jaw?

Question: Which Maker installed a motion detector near the Golden Gate Bridge to keep track of the number of suicide attempts?

Question: Which Maker is bringing something to Maker Faire that is powered by a 12 horsepower engine that uses propane gas?

Question: Which Maker has a daughter who is also exhibiting at the Maker Faire, at the PTDR table?

Ok, I think we will end the contest here, which will give us enough time to send out all the tickets to the winners. Thanks for playing!