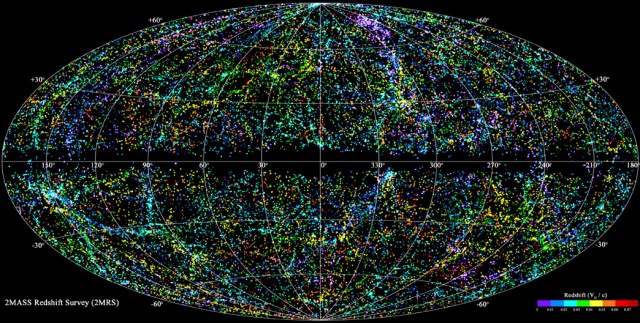 Astronomers at the Harvard-Smithsonian Center for Astrophysics have unveiled the largest 3D map yet of the local universe, spanning some 43,000 galaxies within 380 million light years of Earth. The project is the result of a 10 year survey of the stars, the 2MASS Redshift Survey (2MRS).

The 2MRS mapped in detail areas previously hidden behind our Milky Way to better understand the impact they have on our motion. The motion of the Milky Way with respect to the rest of the universe has been a puzzle ever since astronomers were first able to measure it and found it couldn’t be explained by the gravitational attraction from any visible matter. Massive local structures, like the Hydra-Centaurus region (the “Great Attractor”) were previously hidden almost behind the Milky Way but are now shown in great detail by 2MRS.