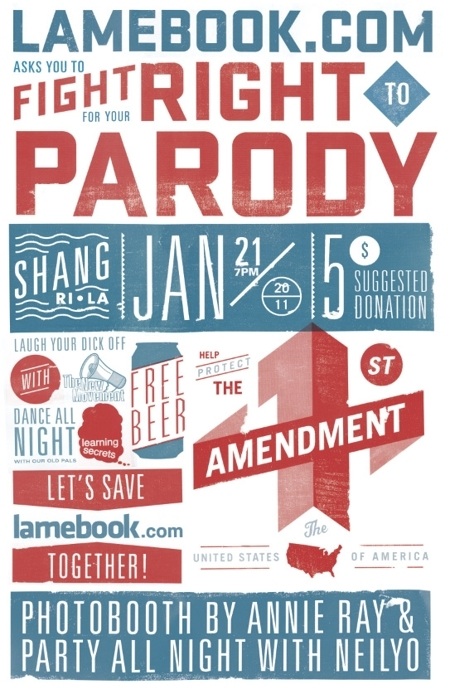 Lamebook.com, a parody of Facebook, is being sued by Facebook, so to help raise money for their legal defense they are having a Fight For Your Right to PARODY fundraiser on January 21st at Shangri La in Austin.

Last year ended on a harrowing note for internationally-renowned Austin-based humor blog Lamebook.com. After pursuing a daring legal strategy and filing a defensive suit against social networking leviathan Facebook–who had wrongly threatened to sue the small parody blog for alleged trademark infringement–Lamebook.com was promptly counter-sued by a none-too-pleased Facebook, caught off guard by a plucky small business that – *GASP!* – stuck up for itself under pressure from the multi-billion dollar company!

The legal wrangling has left the founders of the site, graphic designers Jonathan Standefer and Matthew Genitempo, on the hook for tens of thousands of dollars in lawyer’s bills, prompting them to reach out to fans to donate a few bucks to help their cause: defending their first amendment right to make fun of whomever they damn well please. Thing is, for all of its notoriety, Lamebook.com hasn’t made its founders rich, although it has provided a way for a few buddies to work on a fun project together that pays the bills at the end of the month and provides a daily laugh for people all over the world. Yet, fun aside, Lamebook and other humorists, writers, and rascals like them are coming under heavy fire from huge, humorless corporations like Facebook on a regular basis, throwing into question the future of free speech–specifically satire and parody–in New Media.

And so, at 7:00PM this Friday, January 21st at Shangri-La in Austin, Texas, Lamebook is asking fans to come out, donate some moolah to their cause, have a few drinks, and be entertained by a variety of guests including ruthlessly inventive Austin DJ duo Learning Secrets; the all-singing, all-dancing one-man party Neiliyo; some of Lamebook’s best posts read LIVE by members of the New Movement Theater; and delicious vittles served up by the trailer foodies at Pig Vicious. Photographer extraordinaire Annie Ray (annieray.net) will be on hand to chronicle it all. Suggested donation is only $5 which ensures FREE BEER (as long as it lasts!) and the knowledge that attendees are doing their part to ensure that the first amendment applies to everyone, all the way down to the little guys.