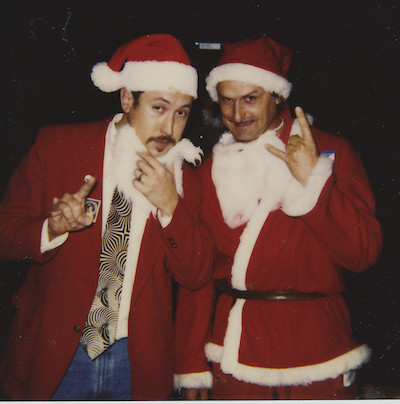 In the post “What the F*** should we do with Santa?,” Laughing Squid partner John Law gives his two cents on SantaCon, the (now) annual multi-city event where folks dress as Santa Claus (and other characters) and en masse visit bars and other public spaces. Law is the co-author of the upcoming book, Tales of the San Francisco Cacophony Society.

…When we first donned the red and frog marched through The Fairmont, The St. Francis, Macy’s and Planet Hollywood, NO ONE had the IDEA in their head. Don’t believe me? Watch Chuck Cirinos’ short film of the second SF SantaCon or Scott Beale’s “You’d Better Watch Out” from Portland 96. People on the route, shoppers, businessmen, cops, pizza chefs, pretty much anyone we ran into was surprised if not shocked by our Kringle crusade. Some folks found it whimsical, some offensive, most found it just bizarre, vaguely entertaining or maybe just vaguely threatening or annoying. Even so, almost no one at that time had the image in their head before. Today however, the idea of seeing five thousand Santas is nothing new to the typical TV watching citizen and/or internet user (in other words: everyone) whether they’d ever seen such a thing in the flesh or not. To me, this is what changed. The sense of wonder at seeing something inexplicable. Something you couldn’t conceive of. Something truly strange.