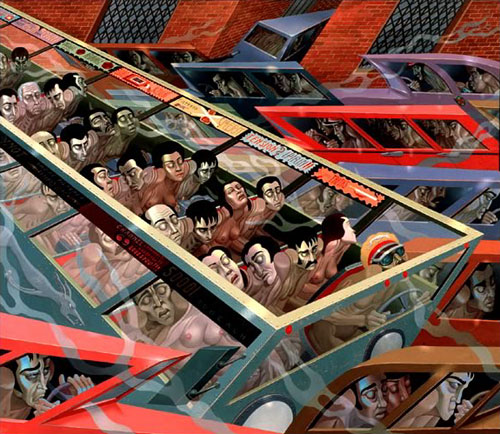 A retrospective featuring the fantastic artwork of Bay Area social surrealist painter Irving Norman is opening this Saturday, September 23rd at the Crocker Art Museum in Sacramento. The exhibition, “Dark Metropolis: Irving Norman’s Social Surrealism” will run through January 7th, 2007, then travel to Pasadena Museum of California Art and from there to the Nora Eccles Harrison Museum in Logan, Utah.

Unmasking the realities of human nature and the contemporary society in which we live, Irving Norman aimed only “to tell the truth of our time”. His highly detailed paintings are powerful critiques of modern life, painted in the hope of promoting change. The atrocities Norman witnessed in volunteer service during the Spanish Civil War jolted his consciousness, and he began to express his experiences through drawing and then painting from the 1940s to the 1980s. With the belief that his paintings could act as agents of social reform, Norman felt that pointing out the inequities, horrors and foibles of human behavior might somehow cause people to reconsider their actions. Most paintings were intended for public institutions, particularly museums, where the artist thought “all people could come and study them and contemplate”.

Norman’s canvases are monumental in scale and teem with swarming figures, clone-like in their repetition, yet retaining elements of individuality. These figures are constricted by small urban spaces, caught in the crunch of bodies that fill city streets and subways, and decimated by the pain of poverty and the horror of war. The darkness of his visions is relieved by his jewel-like color harmonies and sharp wit. Once the spectator is engaged, Norman’s unsettling visions cannot be ignored or forgotten. Through scale and infinite detail he makes the immensity and atrocities of war and contemporary society comprehensible. While often horrific and terrifying, these visions contain a deeper message: one of hope.

Irving Norman’s last museum show was in 2002 with the “On Being Human: The Social Surrealist Paintings of Irving Norman” exhibtion at the Santa Monica College. The last time his work was shown in the Bay Area was a decade ago at San Francisco’s De Young Museum with “The Measure of All Things” solo show in 1996.

A book of Irving Norman’s art, with the same title as the exhibition, “Dark Metropolis: Irving Norman’s Social Surrealism”, is being published this fall by Heyday Books of Berkeley.

I never had a chance to meet Irving Norman. He passed away in 1989, but I became good friends with his wife Hela Norman while working on my documentary about the amazing Bay Area social surrealist painter Alonso Smith, who was a close friend and comtemporary of Irving. Hela has been working on this museum exhibtion and book for the lst few years and it’s great to finally see it all come to life. Irving is very fortunate to have someone like Hela to help preserve and promote the legacy of his life’s work.

UPDATE: Here is some coverage of the show: