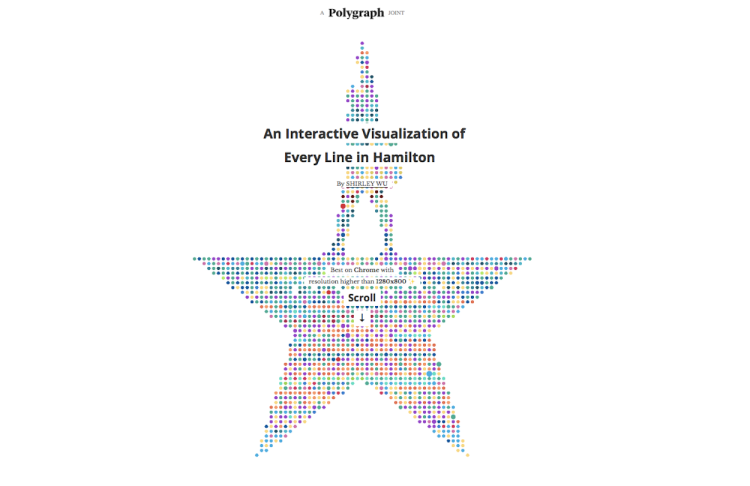 Software engineer Shirley Wu created an interactive visualization for Polygraph that breaks down every line of the popular Broadway musical Hamilton by character, conversation between characters, and theme.

Lyrics are represented by circles with a different color for each character, and users can highlight different characters to find where they appear together and interact.

Wu also released all the data and files she used to create the piece through GitHub.

When I started digging through the lyrics, I was curious about two things: the relationships between the main characters, and the recurring phrases associated with those characters.

So I went through every single line in Hamilton (twice ???? ) and recorded who sang each line, as well as who that line may have been directed towards. I’ve noted every phrase that was sung more than once across more than one song, and grouped them into broad themes.

Excited to finally share "An Interactive Vis of Every Line in #Hamilton"! Filled with analysis & colorful #dataviz ???? https://t.co/bZRrw4Xfy6 pic.twitter.com/AhaSQT8NdK

Every action's an act of creation. https://t.co/LPV6AMzA0o