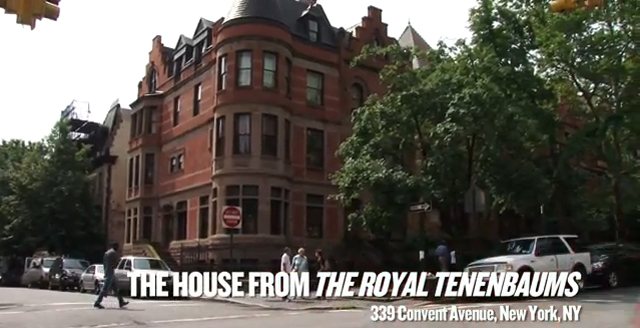 The pop-culture road-trip team at the A.V. Club’s web-video series, Pop Pilgrims, recently traveled to the house used in filming for the 2001 cult classic flick, The Royal Tenenbaums. What they discovered on their visit to the house was a story of how the once-empty, and nearly foreclosed on, house was transformed into the gorgeous, richly decorated set under the command of Tenenbaums’ Director Wes Anderson. The video and corresponding article have additional filming location insights that cinephiles will certainly appreciate.

The Royal Tenenbaums is set in New York, but not really. The city viewers see in the film certainly looks like New York, but the names have been changed and, in at least one case, an iconic landmark covered up. Consequently, the house that Royal Tenenbaum (Gene Hackman) bought in the winter of his 35th year is located on Archer Avenue in the film, not in Harlem on Convent Avenue at 144th Street, as it is in real life.

The house had been in foreclosure until the current owners purchased it, but tracking them down was so problematic that Anderson finally just left a note on the front door—which surprisingly worked. The new owners hadn’t moved in yet, and the house needed major repairs, so the director really had a blank canvas. The house being empty also helped the production make some structural improvements so the building could sustain the strenuous filming process.