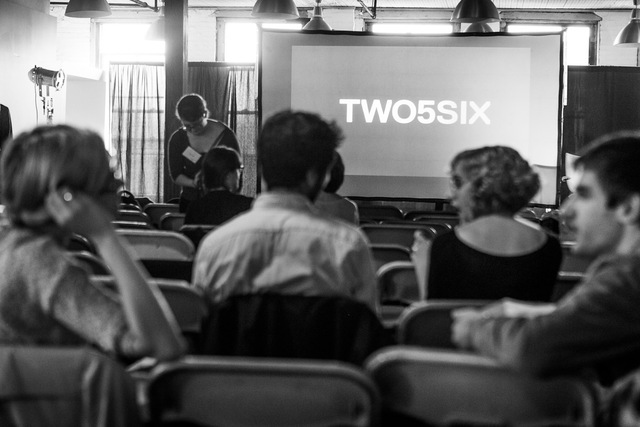 Speakers at Kill Screen’s Twofivesix video game art and culture conference addressed a wide range of topics including video games as a storytelling medium, an educational tool, and a competitive sport in a series of engaging talks. Oculus Rift creator Palmer Luckey, Dance Central 3 creative director Matt Boch, and Sifteo co-founder Dave Merrill discussed how the way we interact with and play video games is rapidly evolving with unique new hardware like the Kinect, Sifteo cubes, and the Oculus Rift virtual reality headset.

Rather than interacting with games using a traditional controller input, game creators have worked to create more immersive gaming experiences by tailoring unique control systems that feel natural and intuitive for each game. For example, Boch pointed out that Guitar Hero‘s unique instrument-like controllers — as opposed to a traditional Xbox 360 or PlayStation 3 controller — make playing the game both more intuitive and immersive.

Similarly, Luckey said that casual players using the Oculus Rift virtual reality headset to play Valve’s Team Fortress 2 acclimated to the experience much easier than hardcore gamers who had spent hundreds of hours playing the game. The reason, Luckey asserted, is that it is much more natural for an Oculus Rift-wearing player to turn their head to look behind them than it is to learn to flick the mouse back and forth quickly like skilled gamers do to simulate the sensation on an ordinary monitor.

However, some developers don’t believe that making the player feel like they’re physically part of a video game by seeing through the main character’s eyes is the best approach. When making Dance Central 3, Boch asked “why can’t the player in the room just be the player?” So instead of making an avatar representation of the player on screen, developers opted to turn the “living room into the play space” and create an entirely different form of immersion using the Kinect as a unique control system.

Sifteo co-founder Dave Merrill’s keynote speech also touched on how gaming hardware and video games themselves have evolved to create more visceral, unique experiences for players. Games began with purely physical objects like blocks and dominoes, and then evolved into software-based video games on consoles and computers. Today, some of the most immersive games make use of uniquely tailored hardware and software working together, like games specifically designed for the Sifteo Cubes, the Oculus Rift, the Kinect, and others.

In an interview with Laughing Squid, Oculus Rift creator Palmer Luckey said “the best games for any platform are always going to be the games that were designed specifically for the platform,” especially when a given platform has unique elements like touchscreen, six-axis, or gesture control. For example, Temple Run is short, easy to learn, and uses intuitive gesture controls that fit perfectly for the mobile platform for which it was built.

As for the Oculus Rift, Luckey said that the virtual reality headset will “take games far, far beyond what they are currently capable of doing.” As developers experiment to learn what kinds of game experiences work well in virtual reality — like flying, riding a roller coaster, or having your head chopped off in a guillotine — they will also have to figure out what kinds of controller inputs feel the most natural and immersive. “For the first time in gaming history, we are within reach of creating a system that allows players to view and interact with the virtual world in the same way they interact with the real world. Nobody knows what the perfect interface is, but we have to move beyond gamepads and keyboards to truly take advantage of everything that VR has to offer.”