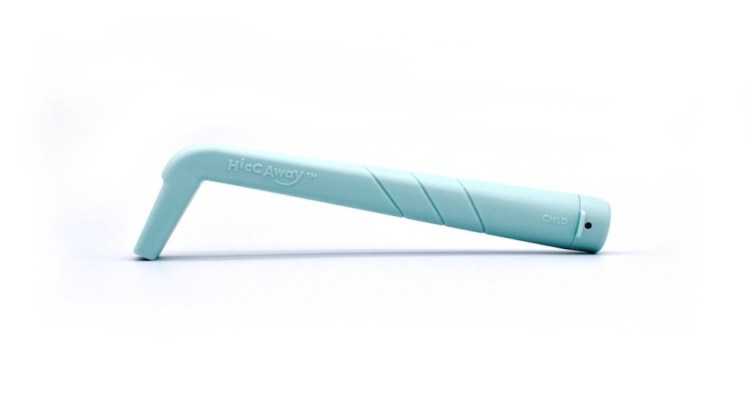 HiccAway is a very clever adjustable, hard plastic straw that is bent in such a way as to get rid of the hiccups simply by using it to take forcible sips of water. The bent shape of the straw position tells the physiological actors involved to reset and allow for normal breathing.

HiccAway is a singulstat device (singultus = hiccups), that lowers the diaphragm while opening first, and then closing the epiglottis (the leaf-shaped flap in the throat that keeps food out of the windpipe). Doing so stimulates at the same time the “Phrenic” and “Vagus” nerves, allowing the brain to “reset” and stop the hiccups.

HiccAway was developed by Dr. Ali Seifi, a practicing MD at the University of Texas Health Science Center in San Antonio who works with patients recovering from neurological injuries. Upon noticing that these patients were often plagued with hiccups post-surgery, Dr. Selfi decided that he wanted to do something about it.

After witnessing his patients uncomfortable with hiccups during intense recovery he realized that there had to be a simple way to relieve this unnecessary discomfort. …He was determined to create a solution. And after a couple of years of testing and countless variations he developed HiccAway!

Dr. Selfi first used Kickstarter to raise funds for his idea. The project was successful and now the HiccAway can be purchased online.

HiccAway is available via Amazon and Walmart.com in the United States. In Europe, we have additional online distributors (see Retailers). HiccAway will be available in the pharmacy of H-E-B (Texas locations) in June, 2021.