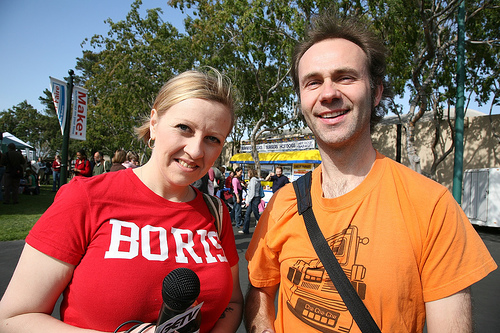 GETV co-founders Eddie Codel and Irina Slutsky will be working full-time for PodTech, reporting to Robert Scoble, the former Microsoft blogger who was hired away from Microsoft by PodTech last month as their new Vice President of Content. Looks like PodTech is on the hunt to grab up all the best of the blogosphere. I’m looking forward to some awesome new GETV episodes now that have an actual budget and Eddie and Irina can quit their day jobs. Oh wait, did they even have day jobs? Ha, well they do now.

I was tipped off to this news by a photo that Eddie had uploaded of he and Irina having lunch with Robert Scoble today. I just called Eddie on his cell phone and he, in fact, confirmed my suspicions that the deal had been made with PodTech (it’s been in the works for a while).

Congratulations to Eddie & Irina, John Furrier & Robert Scoble and the PodTech crew, plus all of the past and future guests and guest hosts of GETV.

UPDATE 1: Here are photos of Eddie and Irina signing the paperwork to close the deal.

UPDATE 2: You can track this story on Techmeme.