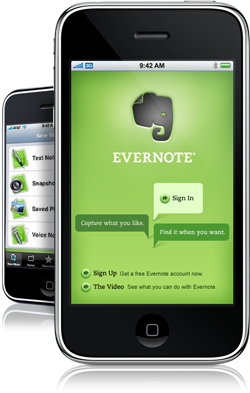 On Wednesday, Google announced that they were no longer going to develop Notebook, which really sucks since I’ve been using that quite a while to keep track of notes, projects, etc. So of course I asked Twitter for recommendations on a good Notebook replacement and by far the service recommended the most was Evernote. In fact as it turns out, Evernote is even working on a Google Notebook importer.

I checked out Evernote a little bit when it was in beta, but yesterday I took a second look and was blown away. Evernote simply rocks! I’ve set it up to sync my notes between my computers (both Mac and PC) using their excellent desktop apps, as well as online through their website and even my iPhone.

In fact, I like Evernote so much that I’ve already upgraded to their premium service.