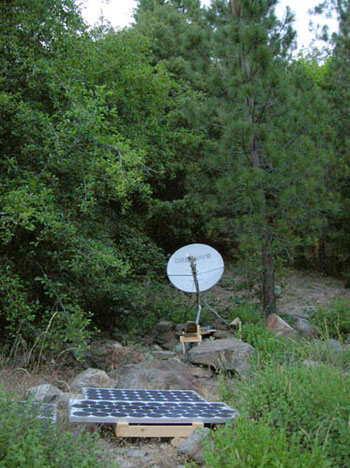 Now in its 4th year, the monthly Bay Area art and technology salon dorkbot-sf is having its first ever South Bay meeting, this Wednesday, August 17th at Onomy Labs in Menlo Park. dorkbot-sf is produced by Karen Marcelo and is chapter of dorkbot which began in New York City and is now in over 30 cities worldwide. dorkbot’s tag line is “people doing strange things with electricity”, but its purpose has been has been expanded to include the following:

This Wednesday’s dorkbot features San Francisco artist Jill Miller who will be presenting: “How to Hunt for Bigfoot: Satellites, Solar Power, and Triangles”, a talk about her project Waiting for Bigfoot.

San Francisco-based artist Jill Miller is participating in Norwich Gallery’s EAST 05 international exhibition, July 2 – August 20, 2005, which was curated by Gustav Metzger. Miller’s durational performance-installation, “Waiting for Bigfoot,” is located in a remote Northern California forest where Bigfoot has been spotted hundreds of times. A live camera feed will be delivered to the internet via satellite uplink, 24 hours a day. The entire campsite is powered by solar energy. She will live at the campsite, situated in the epicenter of Bigfoot sightings, for the duration of EAST 05. She will be in San Francisco for a brief break from Bigfoot hunting to speak at dorkbot.

The second part of this month’s dorkbot features Scott Minneman and Dale MacDonald of Onomy Labs and their presentation: “Make-Tanks: a New Paradigm for Innovation”

The past century saw the emergence of corporate and military “think-tank” laboratories as a dominant site for technological innovation. The “Make-Tank” is a more grounded alternative to this model, firmly rooted in the belief that tinkering and hands-on experimentation is pivotal in discovering the potentials of emerging technologies and scientific discoveries. Make-Tanks existed before this period (in another Menlo Park, for instance), lurked in garages during, and are again on the rise, even as corporate research funding is on the wane.

Here are my photos from last month’s dorkbot-sf which featured Otis Fodder, The Evolution Control Committee’s TradeMark G. and monochrom.