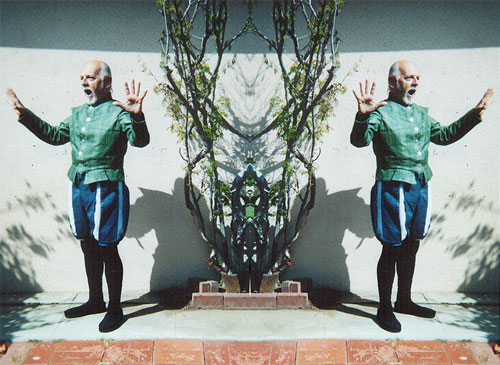 California romantic poet Donald Sidney-Fryer (Wikipedia entry) will be appearing at Borderlands Books in San Francisco on October 22nd for a 4pm signing of the third volume of his “Songs and Sonnets Atlantean”. Donald was our featured artist for Tentacle Session #15 back on April 16, 2000 and this will be another rare opportunity to see him in person.

Donald Sidney-Fryer is a brilliant romantic poet and scholar of the arcane, he has amazed audiences with his unique and beautiful readings since the first Arkham House publication of his collection Songs and Sonnets Atlantean in 1968. If impossibly lovely landscapes and dark eldritch worlds are your cup of tea please come and see this unique and rarely seen poet read from his latest work.

Continuing the brilliant tradition of California Romantic Poetry whose luminaries include Ambrose Bierce, George Sterling and Clark Ashton Smith, the poet-author Donald Sidney-Fryer (b. 1934) also stands in the long shadow of that other Courtly Poet, Edmund Spenser (1552?-1599), author of the Elizabethan epic romance The Faerie Queene.

His major contribution in the poetic vein is his continuing series of Songs and Sonnets Atlantean (first series, 1971; second series, 2003; third series in preparation), which uses the myth of Atlantis as a springboard for both art and artifice. The original poetry is presented under the multiform guise of translations from the Atlantean of Prince Atlantarion and the Renaissance French of Michel de Labretagne, supplemented in the first series by introduction and notes by premier Atlantologist Dr. Ibid Andor (1895-1990).

S. T. Joshi has called him “an assured master of many poetic formsâ€¦ especially the alexandrine” who has “a vibrant, exotic imagination that vivifies realms of fantasy into living realities.” Brian Stableford designates his ongoing S&SA “a brilliant achievement.”

In addition to his original works, Donald Sidney-Fryer has translated important works of French poetry and poems-in-prose by Baudelaire, JosÃ©-Maria de Heredia and Aloysius Bertrand (whose forgotten classic Gaspard de la Nuit will soon be published by Black Coat Press).

In the realm of scholarship, Donald Sidney-Fryer’s bio-bibliography of Clark Ashton Smith, Emperor of Dreams (1976) is the cornerstone of all Smith studies. His earlier, seminal essay on Smith’s life and work, “The Sorcerer Departs”, has been revised and reissued, and his critical essay on “The Hashish Eater” provides important insights into this magnum opus of fantastic verse.

His public performances of the works by the likes of Spenser, Baudelaire, and Smith, supplemented by his own poetry (whether a cappella or with self-accompaniment on lute), are intended both to pay homage to his masters and to practice the ancient craft of enchauntment. In this he amply succeeds — and also demonstrates to the enchanted audience the true value of his own crystalline poetry.