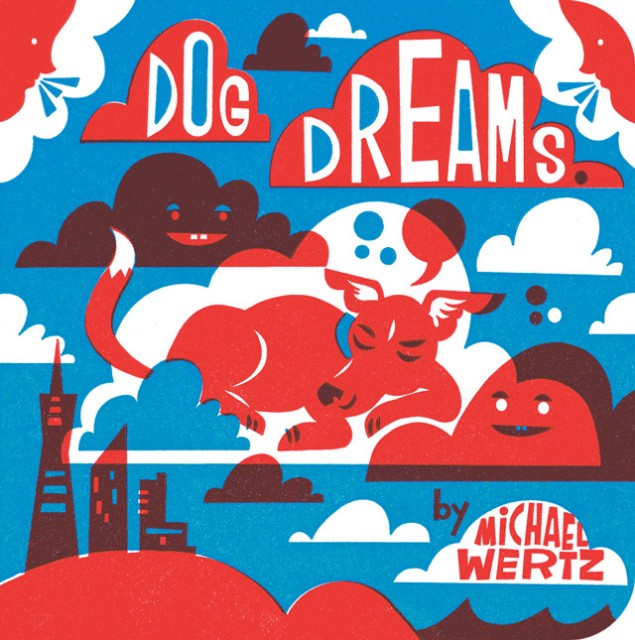 Artist Michael Wertz of Oakland, California has illustrated and authored Dog Dreams, a beautiful board book of letterpress images for kids and adults. The book “imaginatively reveals the hopes, wishes, and ambitions of over a dozen dozing canines through playful imagery and rhyming text”. On January 19, 2012 at 7:30 PM, Bookshop Santa Cruz in Santa Cruz, California will host a singing and book-signing event with Wertz and the band, The Mutts (featuring Suki O’Kane and Andy Cowitt).

The idea for Dog Dreams came to me while watching my (then new) dog Olive sleep on the couch next to me. She twitched, huffed, barked, and jerked her way through a series of (seemingly) thrilling dreams. I’m pretty sure she was dreaming the typical dog dreams: squirrels, cats, and ball. But who knows? Maybe she was dreaming of a trip to Paris – or of flying like a bumblebee. Maybe she was simply sitting for tea in the shade of her favorite tree. This book is about this – as well as a little taste (for kids) of what it might be like to be a grownup.

You may recognize Wertz’s art from the stamps he’s created for The Elsewhere Philatelic Society and the art for their SFMOMA ArtGameLab participatory exhibit, The Peculiar Scholarship of Dr. Bedcannon. He is also known for creating many of the posters for the band, Camper Van Beethoven.