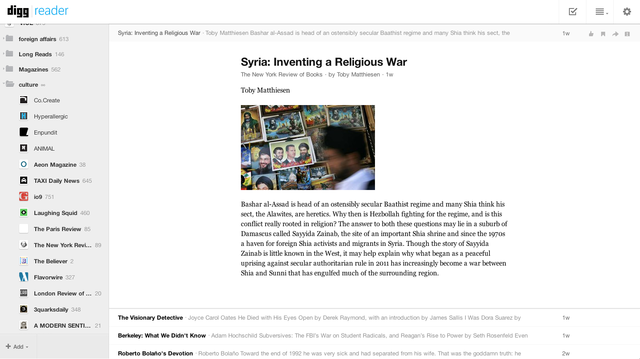 Digg has begun rolling out invites for the beta version of its RSS reader, less than one week before Google Reader’s imminent shutdown on July 1st, 2013. Digg Reader currently allows users to import their feeds from Google Reader, search for new feeds to follow, and browse a list of feeds recommended by Digg’s editors. It also supports keyboard shortcuts and lets users save articles to Instapaper, Pocket, or Readability, share to Twitter and Facebook, and Digg posts directly in the RSS reader. Users can also view their feeds in list view or expanded view, and sort their feeds to see a list of the most popular unread items. Digg also plans to add search, more sharing options, and the option to view only unread items in the near future. Prospective users can sign up for an invitation at Digg, and an iOS app is expected to be available for download in the iTunes App Store tomorrow. Digg plans to make an Android app available before the end of July.

image via All Things D