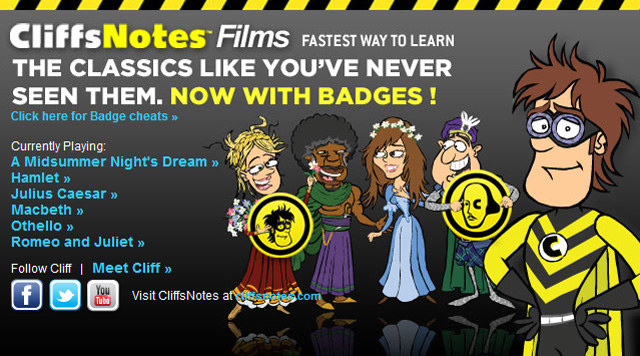 Gleaning the important information from Shakespearean literature is now made even easier with CliffsNotes Films, a web video version of the black-and-yellow study guides, CliffsNotes. AOL’s Cambio and reality show producer Mark Burnett have created the animated CliffsNotes Films web series which features such classics like Hamlet, Macbeth and more. The series stars the animated Cliff Notesworth, a sort of superhero library assistant with the ability “to compress large amounts of knowledge into concise, tasty mind-nuggets while transporting himself into alternative dimension, a literary realm populated by the greatest characters and stories of Western Civilization”. The series just debuted and will expand its offerings beyond Shakespeare in the future.

Come study the classics and leave with basic knowledge of the plots, themes, characters, and the confidence to pass the test.