The “Sheen’s-Korner” show debuted on Saturday night with something that looked like an outtake from That 70’s Show, a group of high school pals making a fake talk show in the basement. Except that it’s real, it’s recorded live and broadcast to the world, and the lead instigator is a 44-year-old world famous actor going through a very public melt-down.

That first episode has now been taken down from Ustream, and a couple of solilo-Sheen’s have subsequently been posted, with his high-ness ranting into phones and looking gaunter in each video. He calls the first episode a failure, drops f-bombs left and right, and continues the prime manic self-obsession that has been eating up media oxygen at a record rate. You can still view the first installment of Sheen’s-Korner on YouTube, if you need just a little more Sheen-wreck.

In breaking news, we’ve unearthed evidence of Charlie Sheen and his now estranged producer Chuck Lorre in their salad days. Well, maybe. Officially it’s credited to Michael Keaton and Henry Winkler (but those don’t sound like real names, do they?). Here’s a visual, the original poster for the movie Night Shift: 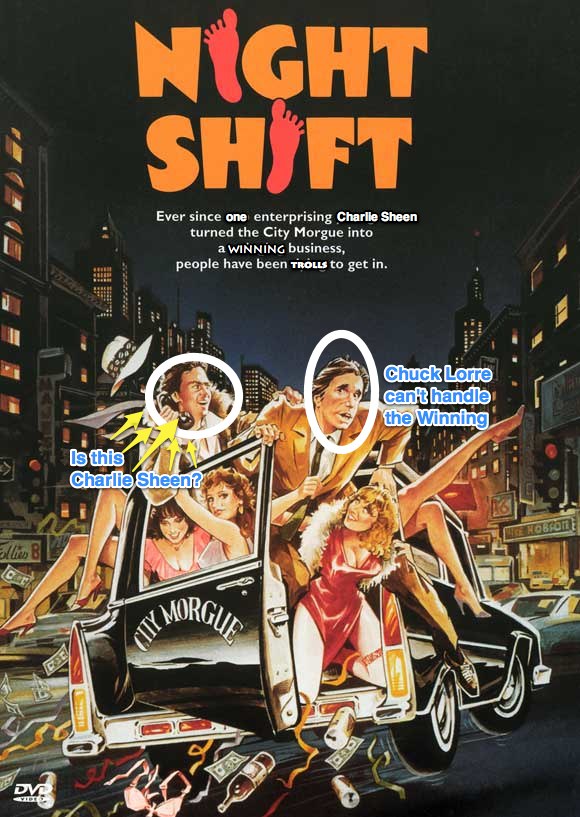 And here’s some footage of Charlie giving Chuck a ride in his fancy new car. Charlie’s crazy, right? Yeah, crazy like a tiger.

Here’s actual footage of when Chuck & Charlie first met, at a summer job on the Night Shift.